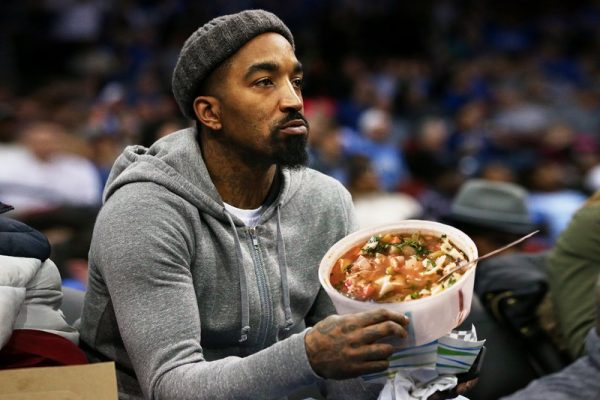 With the mystery of exactly why Cleveland Cavaliers shooting guard J.R. Smith was suspended for Thuursday night’s game against the Philadelphia 76ers now solved, the social media analysis of anyone and everyone has begun. That’s led to a predictable barrage of tweets that offer a healthy supply of humor and creative photoshopping directed at Smith’s odd decision to throw soup at Cavaliers assistant coach Damon Jones:

Swish: Bruh, what? Did I sink it at least?

LeBron: You threw it at Damon. . . pic.twitter.com/iJWmhCXKbX

We've unearthed footage of The Great Soup Incident of 2018. pic.twitter.com/ARNRjAVnon

The embarrassing situation also caught the eye of Golden State Warriors head coach Steve Kerr, who offered a tongue-in-cheek comment about it:

Steve Kerr asked about the JR soup throw in his pregame: "I would've chosen a heartier (food item)" pic.twitter.com/DdgNShKRns

For the record, the flavor of the soup in question that Smith threw at Jones was minestrone. There’s no indication that Jones was hit by either the soup or the bowl it was in at the cafeteria in the Cavaliers’ practice facility. There’s also no word yet on exactly what sparked the bizarre exchange.

Having been appropriately disciplined, Smith will be returning to the starting lineup on Saturday night when the Cavs host the Denver Nuggets.