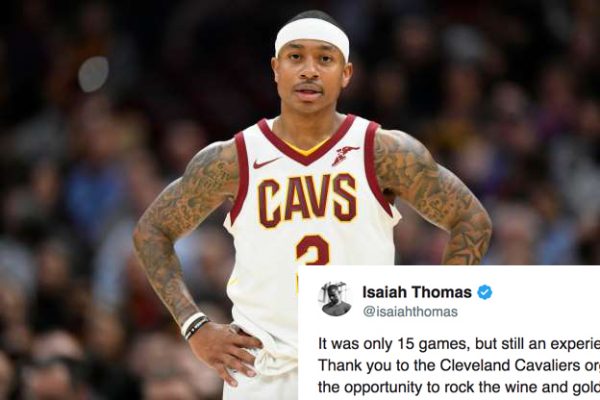 Despite a career with the Cleveland Cavaliers that lasted just 15 games, Isaiah Thomas offered a gracious thank you on Friday to the organization after being traded to the Los Angeles Lakers one day earlier. Thomas was one of four guards the Cavaliers traded on Thursday as they attempted to overhaul their struggling backcourt.

It was only 15 games, but still an experience that I’m grateful for. Thank you to the Cleveland Cavaliers organization for granting me the opportunity to rock the wine and gold this season. God bless and see you on the other side.

When the Cavaliers acquired Thomas last August, he was in the process of rehabilitating an injured hip. That process lasted until Jan. 2, when he played for the Cavs for the first time. His entrance resulted in a standing ovation from the sellout crowd that night at Quicken Loans Arena.

However, that would be the high point during his brief tenure with the team. The Cavaliers struggled to work Thomas into the offense and the point guard often struggled with his outside shot.  Off the court, Thomas wasn’t shy about offering his opinion.