Report: Cavs May Be Willing to Trade Isaiah Thomas 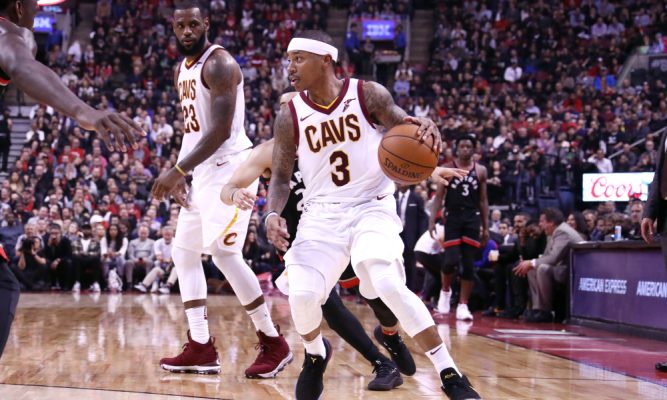 The long-awaited return of new Cleveland Cavaliers point guard Isaiah Thomas from a hip injury was expected to give the team an added boost that would allow them to challenge for supremacy in the Eastern Conference. Instead, since Thomas’ first game on Jan. 2, the Cavs have compiled a record of 3-7 and have lost six of their last seven contests.

ESPN’s Brian Windhorst appeared on the network’s NBA program “The Jump” and noted that those current struggles might possibly lead to the Cavaliers trading the pending free agent. The reason, according to Windhorst, stems from the reported tension that’s built up since Thomas rejoined the team.

“The question is…would they consider making Isaiah Thomas available? I can tell you this. It’s going very poorly with Isaiah and the Cavs right now,” Windhorst said. “There is a lot of frustration within the team because he’s a guy who shoots the ball a lot. He holds the ball a lot. And when he’s averaging 30 points and shooting 45 percent from the field as he did last year for the Celtics…things went well. Right now, there’s a lot of frustration with the way Isaiah’s playing on the team. And I wonder, even though it’s so early in terms of his return from injury…I wonder if the Cavs would consider moving Isaiah and would they put in a call to the Hornets to see if they could figure out if they could get Kemba Walker.”

Charlotte Hornets owner Michael Jordan indicated that his team wasn’t necessarily seeking to trade Walker, saying that the Hornets would have to receive an All-Star player in return. Thomas fits that qualification, though his uncertain status past this season makes a potential trade more problematic. Any such deal could also reportedly include the Cavs sending their own first-round pick to the Hornets and receiving small forward Nicolas Batum.

Should the Cavaliers emerge from this current slump and go on another extended winning streak, such talk will presumably diminish. However, until that occurs, the rumor mill will continue to work overtime.