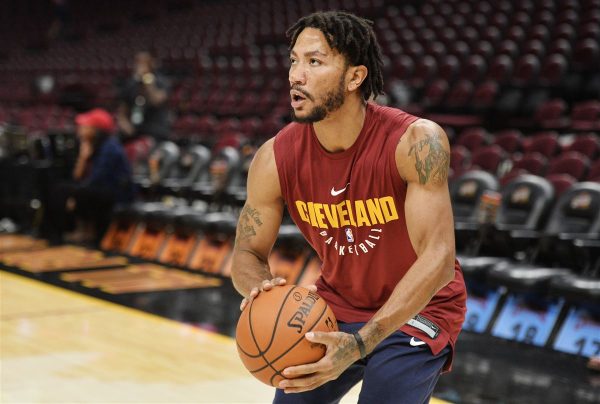 Earlier this season, it was reported that Cleveland Cavaliers point guard Derrick Rose was considering retirement after suffering a nasty left ankle injury back in early November. Now, it seems the former MVP is on the cusp of finally returning to the court.

On Thursday morning it was reported that Rose is listed as probable for tonight’s game against the Orlando Magic.

The Cavs say Derrick Rose is probable tonight. Iman Shumpert is still out.

On Wednesday, Rose told reporters that it looked like he was going to return on Thursday. It seems that that plan has not changed.

Derrick Rose says that it's looking good for a return tomorrow night against Orlando. #Cavs pic.twitter.com/JcBtZDUUGO

“I’m feeling good. Tomorrow look like it’s a go,” Rose said on Wednesday. “I feel good. I haven’t had any setbacks, and I’m feeling alright.”

While Rose has been out for the majority of the 2017-18 season, he did show some flashes of his old self while on the court. He was averaging 14.3 points per game before the injury and while it is unlikely that he will enjoy the same kind of minutes he was playing earlier in the season, he will still have the chance to serve as a valuable scorer off the bench.

Considering Cleveland’s current defensive woes, it is unclear how much Rose, who has struggled on the defensive side of the ball throughout his career, will help his team. Still, it is always good to get players back from injury, and great to see that Rose will be able to continue his storied NBA career.

The Cavs have lost four straight games and eight of their last 10, and are in dire need of turning things around. While it is unlikely he will play a very large role, Rose will definitely look to have a positive impact on a team that is currently searching for answers