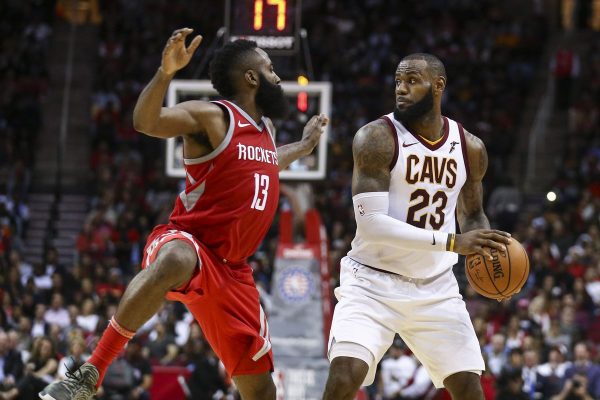 The Houston Rockets already boast one of the most talented rosters in the NBA and currently hold the top spot in the Western Conference. They don’t seem satisfied with resting on their laurels, however, as it appears that they plan to continue to improve by going after LeBron James in the upcoming free agency period.

According to ESPN’s Zach Lowe, Rockets general manager Daryl Morey has already set his sights on signing James this summer.

“They are underdogs, maybe big ones, but Morey has long promised that he will go for it if he thinks Houston has even a 5 percent chance of winning a ring,” Lowe wrote. “He will hunt likely LeBron this summer, per league sources, and hopes to sign [Chris] Paul to another long-term deal. With Clint Capela and Trevor Ariza headed toward free agency, just bringing this group back could vault Houston well into the luxury tax. Tilman Fertitta, the team’s new owner, has said he would pay the tax to preserve a contender.”

While the Rockets have been a perennial playoff team in recent years, they have advanced to the Western Conference championship series just once during the 2015-16 season. They went on to lose that series 4-1 to the Golden State Warriors.

The success James is enjoying with the Cleveland Cavaliers this season should only help to convince him to re-sign with the Cavs and remain a hometown hero. Nothing is stopping any team in the NBA from throwing their hat in the ring, however, and there is no doubt that Houston would be a very attractive destination.

Not only would James get to team up with Harden and possibly Paul to create a new Big 3, but he would also get the opportunity to beat the Warriors in the Western Conference playoffs and avoid facing off against them in yet another NBA Finals.

There is still a lot of season left to play before any real conversations take place between James and his suitors. Hopefully by the time they are able to make their pitch, another championship trophy in Cleveland will convince James to stay put for the foreseeable future.