Report: General Manager Reveals What Cavs Plan to Do With 2018 Brooklyn Pick 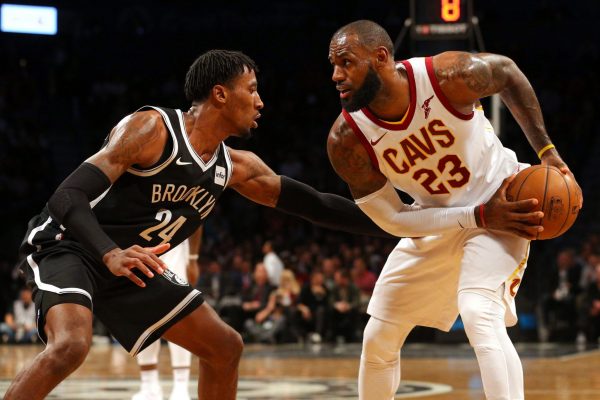 Despite the prospect of having one of the best bargaining chips available during the upcoming trading season, the Cleveland Cavaliers appear ready to hang onto the Brooklyn Nets‘ first-round pick in the 2018 NBA Draft. That selection was one of the key pieces of the August trade that sent Kyrie Irving to the Boston Celtics.

Sean Deveney of Sporting News indicates that the reason that the franchise wants to hold onto the pick is because they want to protect themselves in the event LeBron James departs via free agency in July. Despite the Nets having shown improvement this season, the pick still has a strong likelihood of being a lottery selection, which could conceivably give the Cavs one of the top picks in the draft. Were the season to end today, the Cavaliers would have the 10th overall pick.

“They would be open to a deal by all indications,” one general manager told Sporting News. “But they’re not talking about that pick. That’s the Plan B for the LeBron stuff and from what I know, they don’t want to budge on it.”

The fact that such speculation isn’t etched in stone still means a deal could eventually take place, though any trade would have to bring the Cavs a standout performer. This player would not only have to help the team get past an Eastern Conference squad like the Celtics, but also Western Conference powers like the Houston Rockets and defending champion Golden State Warriors.

“The only way they trade that would be a transformational player, someone who can help them win a championship,” one executive said. “I don’t think there is necessarily a player like that out there, at least not what’s been talked about so far. But you’re not going to deal away your chance at a top player in this draft for the right to lose to the Warriors again.”

Deveney notes that such talk could be a ruse by the Cavaliers in order to boost the value of whatever potential deal might take place:

“As for the possibility of dealing the pick, one league executive raised the notion that the Cavaliers’ reticence is a smokescreen, hoping to drive up the value of the pick by declaring it untouchable and betting that, eventually, the Nets will slide back in the standings and the pick will land in the top five. But the trade deadline is just six weeks away.”

The original deal that allowed the Celtics to obtain a boatload of top picks from the Nets took place on July 12, 2013. The key pieces of the deal involved Boston sending future Hall of Famers Kevin Garnett and Paul Pierce to Brooklyn, a deal that turned into disaster for the Nets.