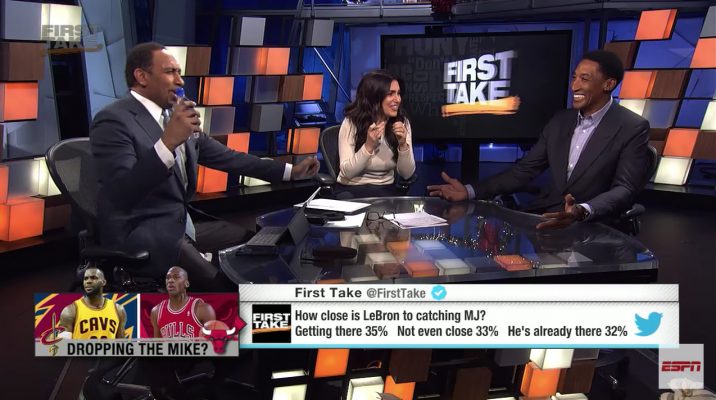 Debate over whether Cleveland Cavaliers forward LeBron James has surpassed the legendary Michael Jordan as the greatest player of all time periodically flourishes during the course of a year, usually eliciting emotional reactions. In the opinion of one of Jordan’s former Chicago Bulls teammates, Scottie Pippen, James has now apparently reached that hallowed summit.

Pippen appeared on ESPN’s “First Take” on Thursday morning and  looks to have changed his opinion of seven months ago on the same program. Then, Pippen had indicated that James still needed to surpass future Hall of Famer Kobe Bryant before challenging Jordan. In addition, he stated that a more apt comparison for James would be Magic Johnson.

“The numbers don’t lie. He’s right there,” Pippen said. “He probably will never catch him in terms of MVP, but in terms of statistics, LeBron is right there. And when you look across the board — not just scoring — check his assists, check his rebounds … he’s probably ahead of Jordan.”

Pippen’s comment caused the show’s co-host Stephen A. Smith to go into his trademark histrionics.

James, who turns 33 on Dec. 30, is currently in his 15th NBA season, with Jordan’s 15-year career broken up by a pair of retirements. During their respective careers, James has presently won three NBA titles, a number that’s halfway toward tying Jordan’s amount of six. The four MVP awards for James place him one short of Jordan’s five.

With regard to individual statistics, Jordan leads in career points-per-game, 30.1 to 27.2, while James has the advantage when it comes to rebounds and assists per game. In those categories, the Cavaliers legend leads on the glass, 7.3 to 6.2, and in dishing to teammates, 7.1 to 5.3.

Entering Thursday night’s home matchup against the Los Angles Lakers, James has made himself a strong contender to capture that fifth MVP award. In 28 games, he’s averaging 28.2 points, 9.0 assists, 8.2 rebounds. He’s also connecting from the field at a 58.3 percent rate and from long-range at a career-best 42.2 percent.