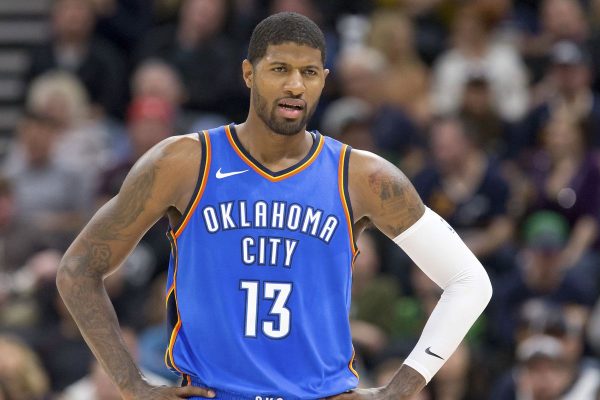 The tumultuous offseason that the Cleveland Cavaliers went through last summer included a blockbuster trade that involved Kyrie Irving being sent to the Boston Celtics. However, a new report indicates that LeBron James was working in the shadows before that in a recruitment effort toward Paul George to try and convince him to ultimately join the Cavaliers.

ESPN’s Ramona Shelburne and Brian Windhorst included that fact in an article about whether or not the Los Angeles Lakers will be able to convince James to sign with them when he can be a free agent next July:

“James aggressively recruited George behind the scenes last summer, selling him on a future together in Cleveland, but the Cavs deal mysteriously fell apart before George was dealt to Oklahoma City.”

That deal to the Oklahoma City Thunder came just hours before the 2017 edition of NBA free agency got underway. George is scheduled to be a free agent in July 2018, with no current indications that he plans to re-sign with the Thunder before that time.

The fact that the Thunder are currently struggling raises the potential possibility of a fading Thunder team dealing George to the Cavaliers before the February trading deadline. The Cavaliers have a major bargaining chip in Brooklyn’s first-round pick, which is likely to be a lottery selection. However, salary cap issues would require some other moves to accommodate any such move.

The news that James was attempting to convince George to join him indicates that he hadn’t made any decision to leave the Cavaliers, despite countless speculation at the time to the contrary.

Shelburne and Windhorst offered the following scenarios about what James might end up actually doing:

“If the Cavs are back in the Finals, and the team is still the class of the Eastern Conference with a potential top lottery pick on the way, it’s easy to see LeBron staying in Cleveland.

“If the Cavs bow out early, or seem as if they are falling off, it’s easy to see LeBron leaving again and finishing his career elsewhere, having made good on his promise to deliver a title to his hometown in 2016.”

Any decision for either James or George about their ultimate destination are still roughly seven months away.