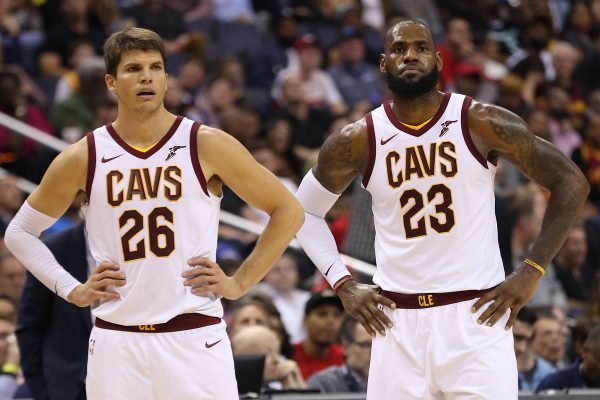 Kyle Korver has enjoyed a long and successful NBA career. During those years he has played with many incredibly talented players, but it seems none of them compare to the greatness that Korver sees in LeBron James.

Following the Cleveland Cavaliers‘ victory of the Atlanta Hawks, the three-point specialist struggled to find a way to explain just how special James is.

“It’s like I’ve run out of ways to explain his (LeBron’s) greatness,” the 6-foot-7 guard began. “He’s just amazing, he makes all of us better than we really are. It’s just the way he plays, the way he reads the game. He’s had to be in attack mode a lot nights this season, but tonight he could kinda feel the guys were hitting shots and he just went into playmaker mode. He was really looking for those passes and I think he had 17 assists or something. He has an ability to feel the game and he can do whatever the game has called for for him.”

Korver played brilliantly in his own right on Tuesday night, finishing the game with 19 points on 6-for-9 shooting from beyond the arc, but it paled in comparison to James’ monster stat line of 23 points, 17 assists, seven rebounds, and two steals.

There’s no doubt that the rest of the team stepping up has been a huge reason why the Cavaliers have enjoyed such immense levels of success recently, but there is also no denying that on some nights the four-time MVP simply wills his team to victory. He is one of the few players in the NBA that is able to lift his entire team to a win, and it is clear through his response that Korver knows just how lucky he is to be one of the beneficiaries of James’ brilliance.

If James can continue this form throughout the season, the sky is the limit for the Cavaliers. While another NBA championship is certainly not guaranteed, James could at the very least tie Michael Jordan and Bill Russell with a fifth NBA MVP award. Only time will tell what the future holds for the King and his teammates this season, but if he can continue this level of play, the future is bright indeed.