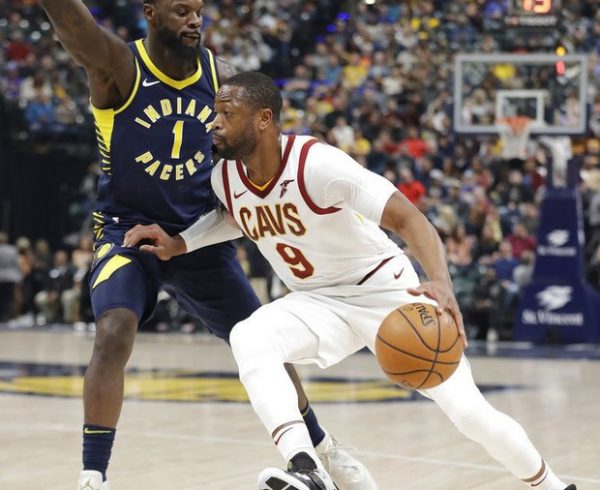 (Indianapolis, IN) — The combination of weak second-half shooting and allowing multiple second-chance opportunities proved to be a deadly combination for the Cleveland Cavaliers as they dropped a 106-102 decision to the Indiana Pacers at Bankers Life Fieldhouse on Friday night. The defeat put an end to the Cavs’ 13-game winning streak and their seven consecutive victories on the road.

Over the course of the final two quarters, the Cavaliers hit on just 34 percent of their shots from the field after connecting at a 50 percent rate in the first half. Even worse were their numbers from long-range, hitting just 2-of-17 (12 percent) in this key area.

The Pacers actually shot worse from the field after the break, hitting on 33 percent of their attempts. However, they dominated on the offensive glass by collecting nine boards in the third and fourth quarter.

“We didn’t really have a good flow,” Cavs head coach Tyronn Lue said. “We had to play small defensively in the fourth because of the switches.”

“The shot wasn’t flowing for us the whole game,” James said. “I thought we were good on defense. The communication, regardless of what lineup’s out there, has to be strong and I thought it was on defense.”

In that final period, the Cavaliers had trailed 93-86 with 9:43 to play, but never managed to retake the lead. They got the margin down to one at 96-95, but seemingly had no answer for the Pacers’ Victor Oladipo, who finished with a game-high 33 points.

“I felt we were a little stagnant late, but give them credit for getting the win,” Dwyane Wade said.

Oladipo was 11-of-24 from the field, though he was deadly from long-range, hitting six shots, with his last one coming with 1:01 left to give the Pacers a six-point cushion. He was especially dangerous during the third quarter when he hit for 20 points.

“We were resilient during this streak,” James said. “We want to continue that and start a new streak tomorrow night.”

The Pacers jumped out to an early 10-2 advantage and had their biggest lead of the half at 18-9 midway through the first quarter. The Cavaliers were able to answer that challenge by going on a 19-7 run of their own before then closing the period with a slim 33-32 lead.

The second quarter was largely a standoff, with both teams trading baskets for much of the period. The Cavaliers managed to bookend their biggest leads of the half around that lengthy stretch by holding a 41-36 advantage in the early portion and then heading to intermission with a six-point lead at 63-57.

“Some things were uncharacteristic of us tonight,” Love said. “We had a lot of missed opportunities.”

Solid ball movement by the Cavs saw them collect 16 assists during the first half, with James and Love combining for 22 of their 28 first-half points during the opening stanza. On the defensive side, the Cavaliers had problems with the Pacers’ long-range shooting, which saw them drill a total of nine 3-pointers over the course of the two quarters.

After Indiana connected on a pair of 3-pointers to start the second half, the two teams again traded baskets before Cleveland managed to take an 81-76 lead with 4:14 left in the third quarter. The Pacers used an 11-2 run to take back the lead and held an 89-86 advantage with 12 minutes remaining.

“I think the slow start in the first and third quarters hurt us,” Lue said after the game. “Both of those gave them life and they took advantage.”

The Cavaliers have little time to ponder this loss, with a home date against the Philadelphia 76ers set for Saturday night. Tipoff for that matchup will be just after 8 p.m. ET.