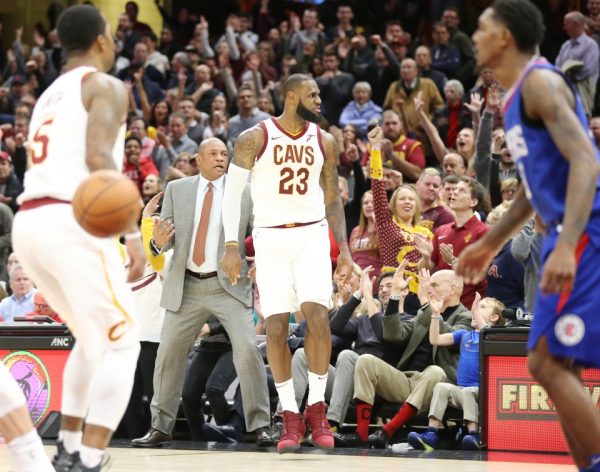 (Cleveland, OH) — Behind a double-double performance of 39 points and 14 rebounds from LeBron James, the Cleveland Cavaliers defeated the Los Angeles Clippers in overtime by a score of 118-113 at Quicken Loans Arena on Friday night. The trio of James, Kevin Love and Dwyane Wade combined for 87 of the Cavs’ points on the night, a victory that marked the team’s fourth straight win.

However, it was James’ 19 combined points in the fourth quarter and extra session that energized the comeback. He scored 16 during the fourth, highlighted by a pair of 3-pointers, the latter of which sent the game into overtime with 47.8 seconds left in regulation. Just 19 seconds into the overtime, James split a pair of free throws, which was significant because it marked the first time all game that the Cavaliers had led. Love would add a pair of clutch 3-pointers, but it was James’ jumper that gave the Cavs a five-point cushion with 31.7 seconds left and made it 116-111, which effectively clinched the game.

“We’ve been playing with a lot of resolve,” James said after the game. “We’ve got guys going in and out, guys that are banged up. We’re just finding a way to win until we can get a full platoon.”

Prior to the final comeback, the Cavaliers had been continually frustrated by getting close, only to see the Clippers push their lead back up. The major problem during regulation was the Cavs’ play during the first four minutes of each quarter. Over the course of regulation, the Clippers outscored them 40-14 in that specific category.

At the start, the Clippers committed four early turnovers, yet scored the first 12 points of the game and led 16-4 after just four minutes of action. The chief culprits for the Cavaliers in another slow start were the issues of allowing far too many easy inside baskets and missing their first 10 field-goal attempts. However, over the final eight minutes, the Cavs connected on 9-of-11 from the field and managed to outscore the Clips 20-11 during this stretch to trail 27-24 by the end of the period.

“They’re a very talented team,” Love said about the Clippers. “For us, we just need to continue to maintain and push our sets.”

The second quarter saw Los Angeles build its lead up, only to see Cleveland continually whittle its deficit down. During the final four minutes before halftime, the Cavs put together a 15-4 run to knot the score at 56 heading into intermission. James’ jumper with 0.8 seconds remaining tied things up, but Wade scored nine of his 19 halftime points during this stretch to spark the surge.

“I thought in that first half, he kept us in the game,” Lue said about Wade. “In the second half, he was more defensive-oriented.”

Wade spoke about his effort during the first half:

“I was just trying to be aggressive because we were down by a lot,” Wade said. “It felt good to get a rhythm because I’m a rhythm player.”

When play resumed to start the second half, the Clippers once again took the lead and then used a 14-3 run to take an 81-66 lead with 3:14 left in the period. As they had before, the Cavaliers battled back by scoring 12 unanswered points to close out the quarter to trail 81-78.

“I definitely feel that we’re getting better with defensive coverages and getting to know each other better,” Wade said.

With eight minutes remaining in the game, Los Angeles had held a 94-84 lead and still maintained an eight-point lead with just under five minutes left. The Cavaliers then managed to go on a 12-4 run that was capped by James’ big 3-pointer. Both teams did have chances to win the game in the closing seconds of regulation but came up short.

“We don’t want to continue to dig ourselves holes, but it’s good that we keep fighting,” Lue said.

The Cavaliers are back on the road in their next outing, with a Monday night trip to face the Detroit Pistons set to tip off just after 7 p.m. The Cavaliers will get their first look at the Pistons’ new home, the $863 million Little Caesars Arena.