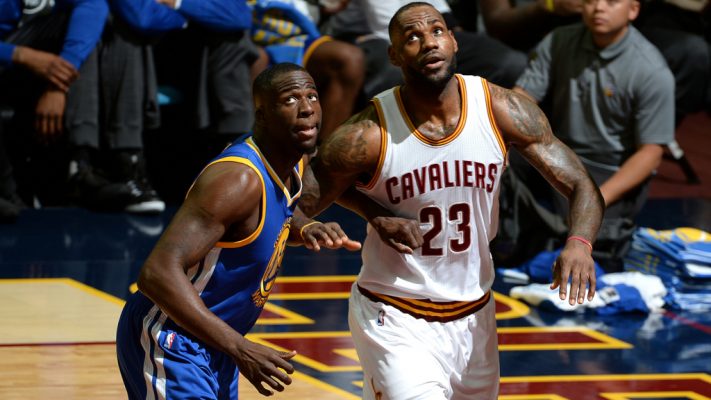 The fact that Golden State Warriors forward Draymond Green is never at a loss for words isn’t news to fans of the Cleveland Cavaliers, especially given the fact that the two teams have met in each of the last three NBA Finals. With the Cavaliers currently struggling in the early portion of the 2017-18 season with a 7-7 record, Green offered his opinions about the team and LeBron James.

Green spoke with USA Today about the current plight of the Cavaliers and also his own team, the Warriors:

Q: What’s your two cents on the Cavs?

Q: Would you be panicking if you were one of their fans?

A: “To a certain extent yes. And to a certain extent, no. I don’t think anyone should be panicking 12 games in, or 13 games in. However, there are some glaring concerns with them. And at the same time, you’re missing a 30-point (per game) player (in Isaiah Thomas) on the bench who’s hurt. So my concern would be that LeBron is playing so many minutes right now (James, in his 15th season, is leading the league in minutes at 38.1 per game; it’s his highest mark since the 2010-11 season).

“Yeah, he’s super human but eventually his super human powers go away, so that would be more of my concern if I’m a Cavs fan or somebody with the Cavs or a player, is like ‘Man, he’s been playing a lot of 40 minute (nights) and it’s only Nov. 12.’ But I wouldn’t be pressing the panic button just yet. At the end of the day, they know how to win. They’ve got a guy who knows how to win, so I wouldn’t necessarily press the panic button. I would see certain things and I would panic about those certain things, just because…I don’t think nobody should be playing 40 minutes a game in November  (James has played 40-plus minutes in six of his 14 games).

Q: That’s his call though, right?

A: “I don’t know who it is. But at the end of the day, if he’s doing it he’s doing it for a reason. He’s not just doing it because (he wants to). That’s tough. That’s tough mentally also. That would be more of my concern over them not playing well. Like, (expletive), it’s Game 13. Who cares who’s playing well? Also, you could be playing great in Game 13 and by Game 30 you could be some (terrible team).”

The Warriors also got off to a less-than-smooth start, though they’ve since gotten back on track by winning six straight games by 17 points or more and then defeating Orlando on Monday night by 10 points. Green’s main issue with his team, which currently has a record of 11-3, is the amount of turnovers they’ve committed. However, he remains confident that Golden State can win its third title in the past four years.

The Cavaliers face the Charlotte Hornets in a road clash on Wednesday night, while the Warriors will be on the road against the Cavs’ main Eastern Conference rival, the Boston Celtics, in a highly anticipated matchup on Thursday evening.