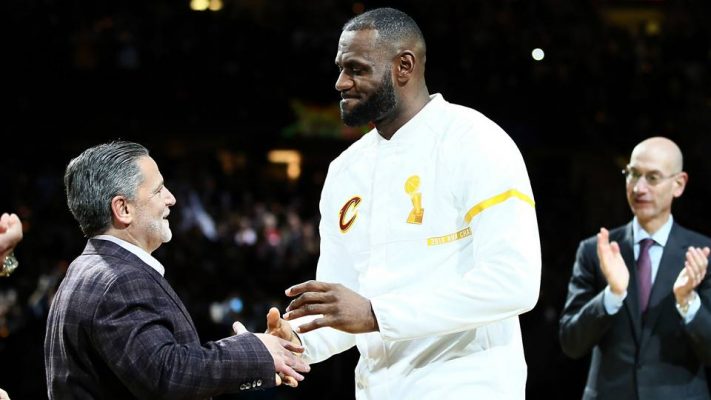 There’s no way of knowing how long LeBron James will play for the Cleveland Cavaliers, but the four-time NBA MVP clearly hopes the Cavs will be in his future one way or another.

Back in May, James made his desire to one day own an NBA team known when he spoke with Ken Berger of The Athletic.

Now, James has expressed that while owning any team would be a dream come true, owning the Cavaliers would be even more special.

“To be an owner of any team would be crazy,” James told The Athletic’s Jason Lloyd. “If this thing opened up and I’m in a position financially, and I’ve got the right team around me, obviously. But who’s to say Dan (Gilbert) will (sell)? I’ve always kept it just player/owner at this point. I guess once I come down to that point, if the conversation needed to be had, I’ll have it. But I don’t have it right now.”

There is no way of knowing just how likely James actually purchasing the Cavs is. While Gilbert took to Twitter over the summer to promise that he would never relocate the team, Joe Vardon of Cleveland.com did report that the team hitting the market in the coming years is not out of the question.

“Gilbert’s promise on Twitter put him on the record that he won’t move the team when the lease expires,” Vardon wrote back in August. “He could sell the team, and while a team spokesman said there has been no thought given to a sale, sources outside the organization suspect Gilbert to consider selling within the next few years.”

James has graced the NBA with 15 seasons of brilliant play, with the majority of them coming in the Cavaliers’ wine and gold. While the three-time NBA champion has stated his interest in playing until he turns 40, there’s no reason why he couldn’t seamlessly transition from star player to star owner once he decides to hang up his jersey for good.

Many have doubted James’ commitment to his hometown throughout his career in the NBA. As he begins to enter the final chapters of his career, however, it’s becoming more clear that James feels a deep connection to both the Cavaliers and the city of Cleveland. James retiring from the NBA only to become the owner of the team that drafted him seems like a storybook ending, but considering the incredible success he has had both on and off the court, it may not be as farfetched as it appears.