LeBron James Gives Glowing Praise of Giannis Antetokounmpo Ahead of Game vs. Bucks 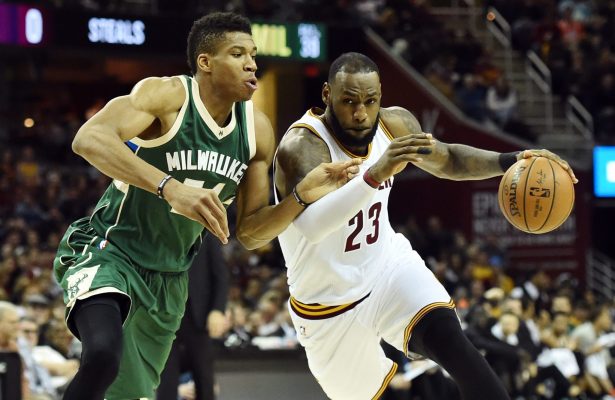 The Cleveland Cavaliers will play their first road game on Friday night when they travel to face the Milwaukee Bucks. One of the chief reasons that the Bucks have improved over the past few years has been the play of forward Giannis Antetokounmpo, which hasn’t escaped the attention of the Cavs’ LeBron James.

Dave McMenamin of ESPN indicated that James believes that superstardom might already be here for Antetokounmpo, or at the very least, isn’t too far away.

“He’s a very dynamic player, very good player and on the path to greatness, that’s for sure, if he’s not already there,” said James.

Otherwise known as “The Greek Freak,” Antetokounmpo is 6-foot-11, yet has the capacity to play in the backcourt, if necessary. He’s currently in his fifth season, yet doesn’t turn 23 until December. After a rookie campaign in 2013-14 in which he was largely used as a reserve, Antetokounmpo has been a fixture in the Bucks’ starting lineup over the past three seasons.

In his career, Antetokounmpo has amassed per-game averages of 15.0 points, 6.9 rebounds, 3.6 assists, 1.3 blocks and 1.1 steals. It’s already apparent that he plans on surpassing those numbers for this season, with his opening night numbers against the Boston Celtics showing that he scored 37, grabbed 13 rebounds, collected three steals and dished out three assists in the team’s road win.