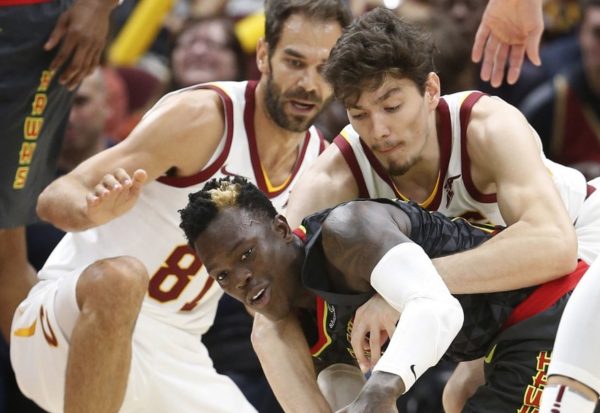 While the Cleveland Cavaliers are focused on the immediate future of trying to win the 2017-18 NBA title, they also have their eye on the future. Specifically, that involves the status of newcomer Cedi Osman, who had been the subject of trade talks both before and during the team’s training camp.

Joe Vardon of Cleveland.com looked at Osman’s situation, as well as those of veteran players on the squad. The belief is that one of those veterans: Richard Jefferson, Channing Frye, Iman Shumpert or even second-year man Kay Felder will either be dealt elsewhere or released since the team has 16 guaranteed contracts for only 15 roster spots.

“When it was suggested to [Tyronn] Lue on Tuesday that the Cavs would likely lose a veteran in this process, he said ‘well that’s not necessarily true,'” Vardon wrote. “Cleveland has long tried to trade Iman Shumpert, who’s 26 but nevertheless a veteran and member of the past three Finals teams.

“Otherwise, the Cavs have 22-year-old rookie Cedi Osman whom they signed from Turkey and have said they do not wish to trade him.”

Osman was part of a trade on the night of the 2015 NBA Draft that sent him from Minnesota to Cleveland. During the past two seasons, he’s been playing in his native Turkey, but signed with the Cavs in July. He’s considered to be in the same mold as Shumpert, offering defense with the prospect of additional offensive ability.

Adapting to the NBA is something that Osman is trying to do quickly, with the overseas game offering only partial help.

“Here in the NBA they play a lot of fast basketball,” Osman said. “Overseas it’s not like that. It’s more half court plays and stuff. But here always running, fastbreak points, easy points. That’s not a problem for me. Overseas I was playing like this all the time. I’m the guy with a lot of energy and the guy who likes to run the floor all the time. I think that will not be a problem for me.”

Lue isn’t looking forward to the inevitable move by the him, but is looking to preseason play to help make the decision easier.

“It’s a tough process if you can move guys or if you have to let one go,” Lue said Wednesday evening. “It’s going to be a tough decision. Just trying to see who plays the best for us, who stays healthy and we’ve got to go from there.”

The Cavaliers will have to make some sort of decision by Oct. 16, the day before they open their NBA regular season with a home game against the Boston Celtics.