Report: LeBron James ‘Would Love’ to Team Up With Russell Westbrook 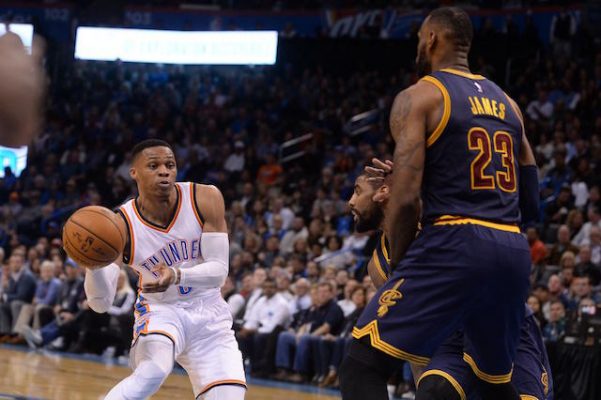 While the current sentiment is that Cleveland Cavaliers forward LeBron James will likely leave the team after the upcoming season, for the revamping Los Angeles Lakers, building a team the four-time MVP will be pleased with will be a significant task.

The Lakers may have to stretch that wallet out a little more for another player of James’ liking: Oklahoma City Thunder point guard Russell Westbrook. A move of this magnitude would take quite a bit of maneuvering for the Lakers front office.

“Westbrook’s availability may be the most fleeting,” said Bleacher Report’s Eric Pincus. “Whispers around the NBA suggest James would love to team up with the explosive guard.”

The pairing of athletic triple-double machines would present an exciting duo for the Laker faithful, immediately putting the team in championship contention. Putting Los Angeles back onto the national and international front pages for print and sports digital ink sites — as well as the likely continuous ESPN/Fox Sports obsessions with the players and the Lakers — would be a boon for the league.

However, aside from James coming to LA, this would require the reigning league MVP and Palmdale, CA native to forgo inking a massive five-year, $207 million extension, which he’s yet to sign. Many league executives do expect him to accept the terms.

In addition, until the Lakers move some burdensome contracts, such as that of forward Luol Deng, the Lakers do not currently have the necessary cap space to sign both James and another max player.