Damian Lillard Responds to Fan Asking If LeBron Has Chance to Become G.O.A.T. 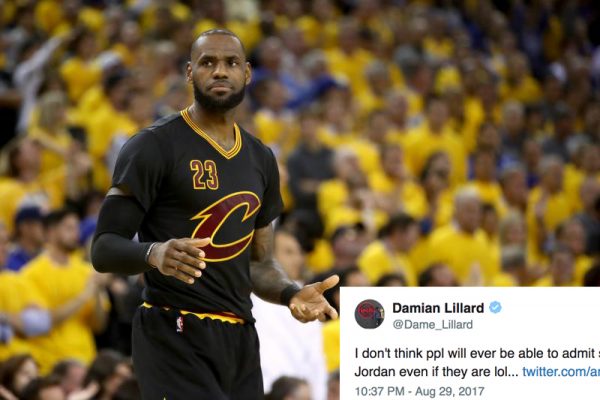 Considering Cleveland Cavaliers forward LeBron James as the greatest player of all-time can often be a fluid notion, depending on the time of year and the individual offering the opinion. In the opinion of Damian Lillard of the Portland Trail Blazers, some who still favor Michael Jordan may not be able to bring themselves to actually consider the concept.

@Dame_Lillard you think Bron has a shot to become the GOAT?

I don't think ppl will ever be able to admit someone is better than Jordan even if they are lol… https://t.co/DiLT7BLHd5

The 6-foot-3 Lillard has established himself as one of the best point guards in the NBA over the past five seasons, averaging 22.4 points and 6.2 assists per game. Last season, the 27-year-old, who played his college ball at Weber State University, averaged 27.0 points and 5.9 assists in 75 games.

The 32-year-old James is getting ready for his 15th NBA season and has four regular season MVP awards and three NBA Finals MVPs to his credit. He’s also been a part of three NBA title teams, most recently with the Cavaliers in 2016.