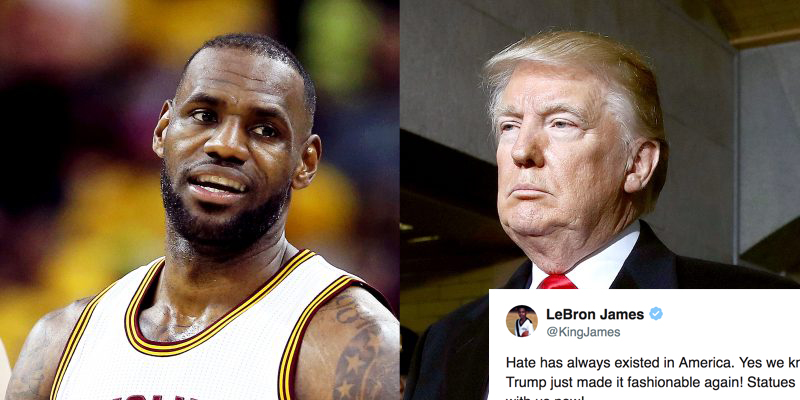 LeBron James made news when he took to Twitter to criticize President Donald Trump amidst last weekend’s Charlottesville protest.

On Tuesday, James did so once again following the president’s latest controversial comments regarding the current civil unrest.

Trump took to the podium to place blame on both the alt-right protesters and left-wing counter-protesters who clashed in Charlottesville, Virginia over the weekend.

“I think there is blame on both sides,” Trump said while answering reporters’ questions in the lobby of his Midtown Manhattan building.

Trump went on to compare tearing down statues of Confederate leaders to destroying statues of American founding fathers such as George Washington and Thomas Jefferson.

Many have taken Trump’s words as a defense of those who side with alt-right protestors and white nationalists, and while James’ most recent tweet admits that racism has always existed in America, he clearly blames Trump for the recent protests and riots.

Hate has always existed in America. Yes we know that but Donald Trump just made it fashionable again! Statues has nothing to do with us now!

As long as James is disturbed by the recent news coming out of Washington, D.C., he is likely to continue making his opinion known. Whether you agree with James’ sentiments or not, it is surely a testament to his influence that he is not shying away from an opportunity to utilize his massive platform to voice what he believes in.