J.R. Smith Destroys Tracy McGrady for Saying Anyone Can Win a Championship 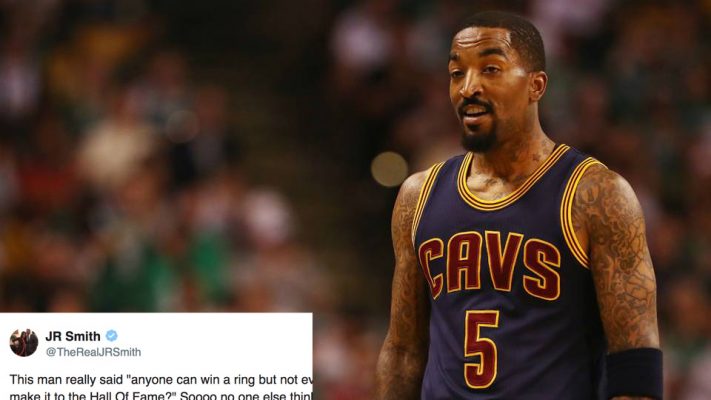 With the latest frenzy surrounding the Cleveland Cavaliers and their superstar point guard’s recent request to be traded from the team, it seems that everyone has chosen to take a stance regarding Kyrie Irving’s demands.

One former NBA superstar and current Hall of Famer, Tracy McGrady, voiced his opinion on the matter and discussed the difference between winning an NBA title and earning a spot in the basketball Hall of Fame.

“Social media can give a lot of people voices these days, and the first thing they say is ‘No rings, no rings,'” McGrady said Friday, per MassLive.com’s Tom Westerholm. “You have to have a great team and some luck to get a ring, right? Unfortunately, I wasn’t blessed with that. But I go back at them with this: Anybody can win a championship. Everybody can’t get in the Hall of Fame.”

One current Cavs player who does have a ring, but likely won’t be getting inducted into the Hall of Fame, took exception to McGrady’s comments and responded with a barrage of tweets on Sunday.

This man really said "anyone can win a ring but not everyone can make it to the Hall Of Fame?" Soooo no one else thinks that dumb as hell???

FACTS!! People who did nothing make the hall!! If it was like MLB ok but Basketball hall a fame you can build a park an get in!! https://t.co/0gEkFoQ7hN

So you played for the Hall an not to win. If I was on his team we fighting idc if we don't play no more. Don't waste my time. Not wit hoop!

Perhaps McGrady’s stance is solely due to the fact that he never even reached an NBA Finals once in his career, while J.R. Smith and the Cavs will likely be going to their fourth straight Finals this season.