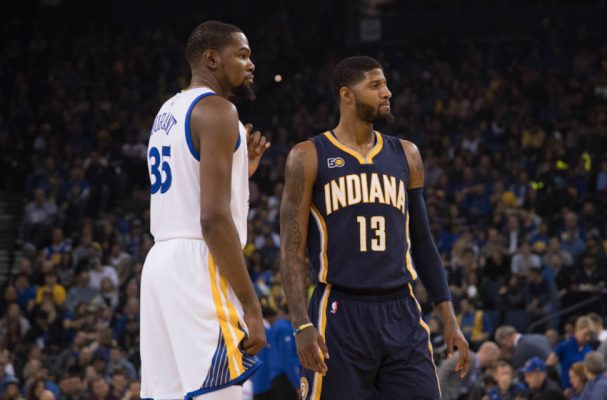 The Cleveland Cavaliers came up short in their efforts to acquire Paul George from the Indiana Pacers last month, with George eventually being dealt to the Oklahoma City Thunder just prior to the start of free agency. However, it now appears that the All-Star nearly ended up as a member of the Golden State Warriors.

ESPN’s Adrian Wojnarowski said during his podcast conversation with George that an attempt was made to deal him to Golden State, which led George to say that such a deal would have been stopped by the NBA. The precedent, according to George, would have been the proposed 2011 deal that would have sent Chris Paul to the Los Angeles Lakers before being stopped by then-commissioner David Stern:

Paul George to @wojespn's re: Indiana talking to Golden State about him: "Yeah, I think that would’ve been the Chris Paul to L.A. situation" pic.twitter.com/occfnd72jQ

Wojnarowski indicated that the Pacers’ asking price of Warriors guard Klay Thompson helped officially put a quick end to any further discussion between the two franchises. That then led Indiana to surprisingly ship George to Oklahoma City in exchange for Victor Oladipo and Domantas Sabonis.

“It was surprising. This team wasn’t one of the teams that we had in mind,” George said on Wednesday. “I thought I was going to four or five other teams that were pretty active in trade [talks]. When I found out it was OKC, I was quite surprised, but at the same time I was happy about the trade.

While George was dealt to Oklahoma City, he still is scheduled to be a free agent next July and has been the subject of countless rumors about signing with the Los Angeles Lakers.