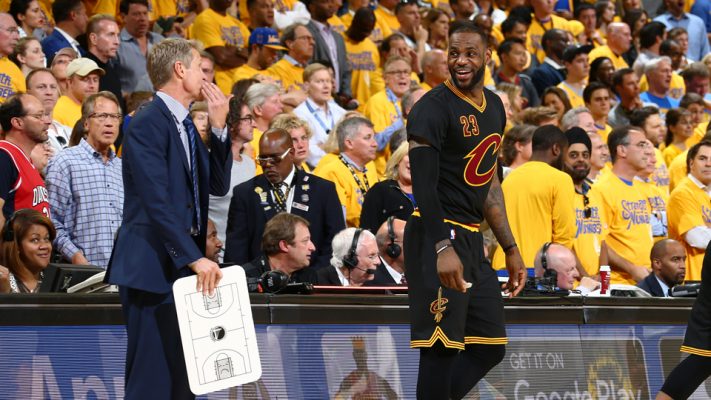 The debate over the greatest player in NBA history will always be a subjective exercise, but in the mind of Golden State Warriors head coach Steve Kerr, any choice that’s made boils down to two specific players with whom he’s gotten up-close looks at during the course of his playing and coaching career. Those two players are Hall of Famer Michael Jordan and Cleveland Cavaliers forward LeBron James.

Kerr recently appeared on Zach Lowe’s podcast and offered a succinct analysis of the continuing debate:

“In the end, it’s LeBron James and Michael Jordan at the top,” Kerr said.

The current head coach played with the Chicago Bulls for five seasons from 1993-98. During his second season, Jordan rejoined the club in March 1995 after having announced his first retirement in October 1993, and over the last three seasons the duo played together, they were part of three consecutive NBA championships.

With respect to James, Kerr has served as head coach of the Warriors for the past three seasons and has faced James and the Cavaliers in each of the last three Finals. Kerr’s Warriors have sandwiched two titles around the Cavs’ championship won last year, when James was named Finals MVP, with even the two defeats sparking comments about James possibly winning MVP accolades.