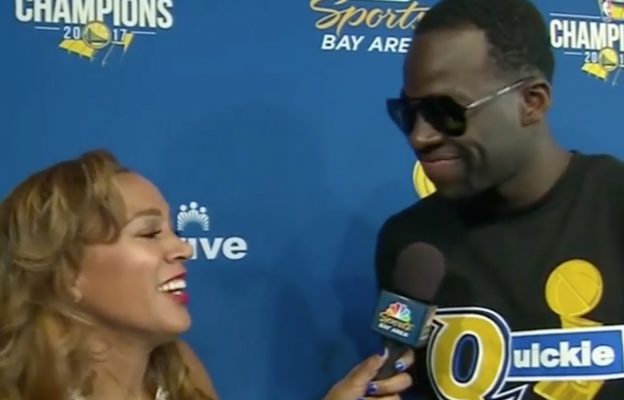 The Golden State Warriors victory parade on Thursday provided forward Draymond Green the opportunity to troll the Cleveland Cavaliers in a subtle way, though he did take some time to explain the reasoning behind his decision.

Draymond Green says his "Quickie" shirt is a response to LeBron's "Ultimate Warrior" shirt and the 3-1 tombstones.

“The Q? That’s what those guys’ arena is called. We got ’em out (of) here quick with the trophy. Quickie,” Green said.

Green was then asked to elaborate on how the shirt was created:

The interviewer noted that the idea was in jest because of the friendship between Green and the Cavaliers’ LeBron James, though Green’s comments seemed to indicate that it was a bit of revenge for similar trolling done by the Cavs during last offseason:

“Absolutely, I can’t forget the ‘Ultimate Warrior’ shirt last year from LeBron, the 3-1 tombstone cookies and all that,” said Green. “I was waiting on this moment, but definitely my guy, that’s family.”