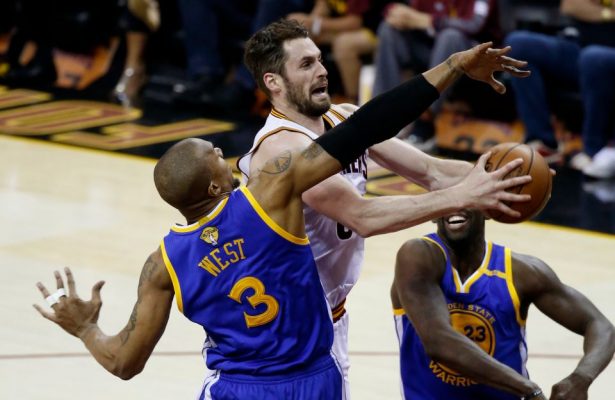 The sting of losing Game 3 of the NBA Finals to the Golden State Warriors still remains fresh in the minds of the Cleveland Cavaliers, and the jolts continue to keep coming. That’s because on Thursday afternoon, the NBA’s Last Two Minute Report indicated that Cavaliers forward Kevin Love was fouled by Kevin Durant on a three-point attempt in the closing seconds of the game, a non-call that might have offered the team one last-ditch attempt at extending the game into overtime.

The Last Two Minute Report looks at NBA officials’ calls during the final two minutes of a game. Thursday’s edition found that with 3.9 seconds remaining and the Cavs trailing 118-113, the following took place:

The play was determined to be an “incorrect non-call,” which means that had it been called correctly, Love would have had three free-throw attempts. While the odds of overtime still would have been very steep, it would have allowed this desperate potential scenario: Love makes the first two free throws, then deliberately misses the third. The Cavaliers then get the rebound and throw it to a three-point shooter, who connects to tie the game at 118 apiece.

Of course, allowing the Warriors to score 11 unanswered points to close the game and the Cavaliers missing their last eight shots from the field are even more painful to contemplate as the team preapres for Friday night’s Game 4. That will tip off shortly after 9 p.m. E/T at Quicken Loan Arena.