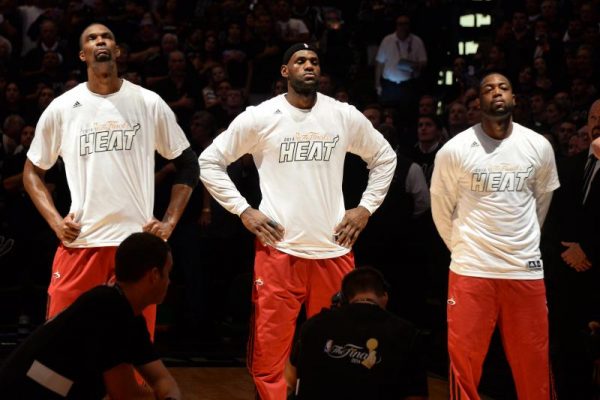 The NBA Finals has brought a number of comparisons between LeBron James of the Cleveland Cavaliers and Kevin Durant of Golden State Warriors, with one of those being the fact that both left their original teams in order to join franchises that were forming what amounted to superteams. Each was criticized for his move by his respective fan base, yet Durant believes that James laid the groundwork for this practice.

Howard Beck of Bleacher Report looked at the issue and offered the opinion that such moves may become standard operating procedure for free agents in the years ahead. He also noted that it’s Durant’s belief that he was simply following in James’ footsteps:

“Though Durant says he did not consider James’ precedent, he readily admits, ‘He paved the way.'”

That certainly made life somewhat easier for Durant. While he heard his fair share of boos during the past season after leaving the Oklahoma City Thunder, that pales in comparison to the torrent of abuse that James dealt with after his 2010 move to the Miami Heat. When James arrived, he joined fellow free agent Chris Bosh and close friend Dwyane Wade, leading to plenty of vitriol across the league. This included fans and media, along with some current and retired players. Still, the Heat reached the NBA Finals for four consecutive years, and in 2012 and 2013, James won the first two of his three NBA titles.

Durant is just two wins away from winning his first NBA championship, having joined the team that knocked out his Thunder squad in the Western Conference finals last season. He also believes that with each similar signing of this nature, the anger will subside:

“As time goes on, and the changes start to become normal, people will start looking at it as normal,” Durant said. “I hope and pray that they make a decision that’s best for them, and nobody else.”

“Once LeBron made that decision, it took a lot of the brunt,” King said. “You sort of almost expect guys now to maybe leave and do what’s best for them.”

King notes the huge jump in the league’s salary cap as one of the main reasons for this mindset, with players still being able to sign huge deals while not remaining stuck in a losing situation:

“The money has made it easier (to leave),” King says. “Now a guy’s going to maybe make $140 million to leave, as opposed to $180 million to stay. It’s a lot of money (to sacrifice), but $140 million is big money, too. … I think guys don’t even look at the money as much anymore when they’re making that decision.”

The pressure of living up to such a contract can also be lessened when other superstars are on the same team, making such moves even more understandable.

“There’s a lot of people who are scared of not being successful,” one prominent player agent said. “‘I can play with people I like and who are good teammates and can help me win.'”

Durant makes no apologies for leaving Oklahoma City, offering the comment that such moves are within his rights:

“That’s what free agency is about—doing what you want to do,” Durant said. “I commend LeBron. I commend LaMarcus Aldridge. I commend guys that stay, because they did what they wanted to do. That’s the power of free agency.

“At the end of the day, I mean, basketball is good. You’re still enjoying the same players. It’s just different jerseys. But I just tried to do what I wanted to do, and make it as simple as that.”

Cavs fans are hoping for some déjà vu when it comes to Durant, since James’ first season in Miami ended with the Dallas Mavericks winning the Finals in six games over the Heat.