Draymond Green Fires Back at Comments Made by LeBron James 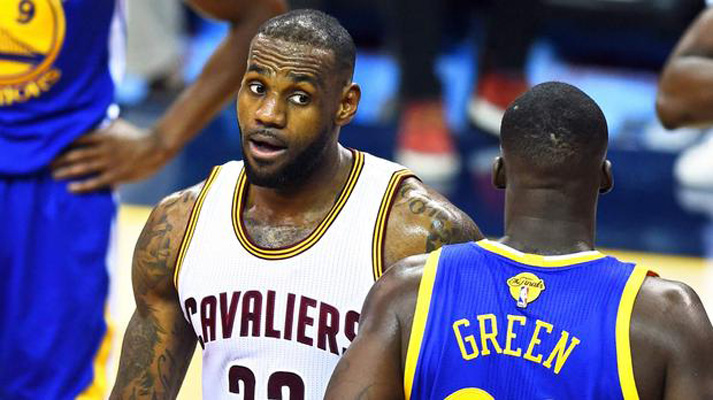 In what should come as a surprise to absolutely no one, Draymond Green is not backing down in the wake of the brief scuffle he got into with LeBron James during Game 4 of the NBA Finals.

The combative and competitive Golden State Warriors forward gave his side of the altercation with the Cleveland Cavaliers superstar in his latest playoff diary post which he wrote for the website The Undefeated:

“[James] stepped over me and I felt like that was disrespectful. I don’t disrespect you on the court. Don’t disrespect me. There’s no love lost. It is what it is. It’s a battle out there. I’m going to battle with whoever it is.

“We had our words. I said what I had to say and he said what he had to say. Move on. I’m not going to sit there and argue with him. I know what position I’m in, in terms of double techs and stuff. Just move on from it.”

With less than four minutes remaining Friday night in the Cavs’ 108-97 loss to the Warriors at Quicken Loans Arena, James attempted to step over Green after the two of them got tangled. Once Green was able to get to his feet, he flung his arm and hit James in the groin.

Green then took another swing at James which did not connect, and the two began yelling at each other. While they were called for double fouls, no flagrant or technical fouls were issued. If the NBA changes its mind before Game 5 Monday at Oakland and assigns a flagrant foul to Green, he would have to sit out the contest because he’s currently one such foul away from a one-game suspension.

When asked after the Cavs fell behind 3-1 in the best-of-seven series what would happen with his antagonist, James claimed diplomatically that the matter was out of his hands.

“That’s the league office, they’ll take a look at it,” James said. “As a competitor, I love going against Draymond, and I’m all about going out there and leaving it on the floor. But when it gets a little bit more than what it should be, that’s what caused me to have words with him.”

In Game 3 of the Western Conference Finals, Green kicked Oklahoma City Thunder center Steven Adams in the groin. The kick came on Green’s way down from a jump-shot attempt. He was called for a Flagrant 1 foul, and afterwards the league upgraded the foul to a Flagrant 2 and issued a $25,000 fine but did not suspend him.