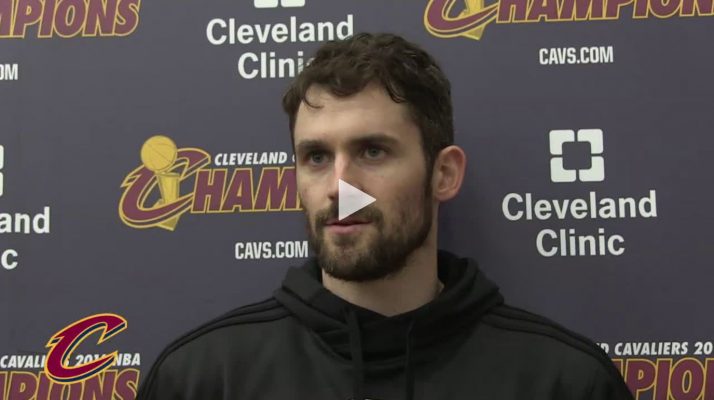 The continuing rivalry between the Cleveland Cavaliers and Golden State Warriors as they head into their third consecutive NBA Finals against one another has seen the latest volley offered. This time it comes courtesy of the Cavaliers’ Kevin Love, who responded to the remarks that the Warriors’ Draymond Green had made prior to the start of the season about wanting to “destroy” and “annihilate” the Cavs in this year’s Finals.

Love didn’t spend a great deal of time speaking about the issue, but clearly got his message across following the team’s Saturday practice:

“He’s one of the most competitive players in the league,” Love said. “He said he wanted us. He has us, starting next Thursday. The way the Finals went down last year, if I were in his shoes, I’d want the same thing.”

Green’s exact comments were as follows:

Cavaliers head coach Tyronn Lue offered much of the same in his comments about Green:

“He’s a competitor. When you’re a competitor, you want the best and vice versa. It’s gonna be a great series,” Lue said. “Draymond’s speaking out of emotion. He’s a competitor, and when you beat a team, they want you back. We’ve got to be ready for the challenge.”

Green has a special reason for wanting to “destroy” the Cavaliers, since it was his loss of control in Game 4 of last year’s NBA Finals that resulted in his suspension for the next contest. The result was that the Cavaliers went on to win the final three games of the series and capture the franchise’s first title.

Game 1 will tip off on Thursday night just after 9 p.m. ET.