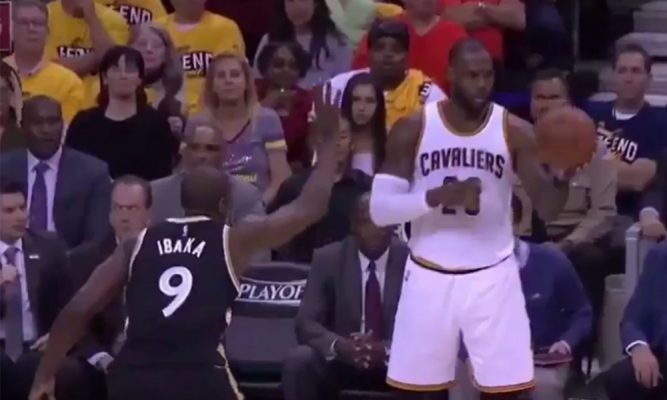 The performance of Cleveland Cavaliers forward LeBron James during the 2017 NBA postseason has been something to talk about. One of the discussions after Friday morning’s shootaround focused on a brief moment during Wednesday’s Game 2, in which the Cavaliers won comfortably over the Toronto Raptors to take a 2-0 lead in the Eastern Conference semifinals.

The play in question dealt with James spinning the ball in his hands in front of the Raptors’ Serge Ibaka just prior to connecting on a 3-pointer. ESPN’s Dave McMenamin wrote that James indicated that the point of the move was psychological, not an effort to show up an opponent:

“It’s bait,” James said. “If [Ibaka] would have reached in, I would have put it on the floor. It was a mental thing. Everything I do is mental. I was just basically in my zone, in my comfort zone, and after I spun the ball and I jabbed him, I seen what I needed to see from the defender to be able to get that shot off. If I didn’t see it, I would have drove it, and if I didn’t have the drive, I would have gave it up and let one of my teammates attack.”

James also downplayed the move, saying that one of the few reasons it was considered newsworthy was because he made the shot:

“What if I missed the shot? What if he stole the ball? We wouldn’t be talking about it,” James said.

Even though the Raptors were on the receiving end of the move, Toronto’s head coach Dwane Casey was more aggravated by his team’s lack of aggressiveness:

“If people want to use the word ‘We got dominated,’ that should get your hair up on your neck a little bit, get you upset a little bit, getting accused of getting dominated,” Casey said. “I hope so, in a smart way. I don’t want to get anybody thrown out or suspended or anything like that, but yeah, you should be teed off or upset when somebody’s using the word dominated, that you got dominated.

“The word ‘dominant,’ that play [where James spun the ball], coming off and having a beer on the sideline, all those things should get you upset to make it a physical contest.”

Equally annoyed was Raptors point guard Kyle Lowry, who indicated that his team’s defense needed to show improvement in the games ahead:

Lowry’s status is questionable for Friday night’s contest following an ankle injury suffered in Game 2. He and the Raptors need to win at least one of the two weekend games to be played at the Air Canada Centre in order to send the series back to Cleveland for Game 5 on Tuesday night.