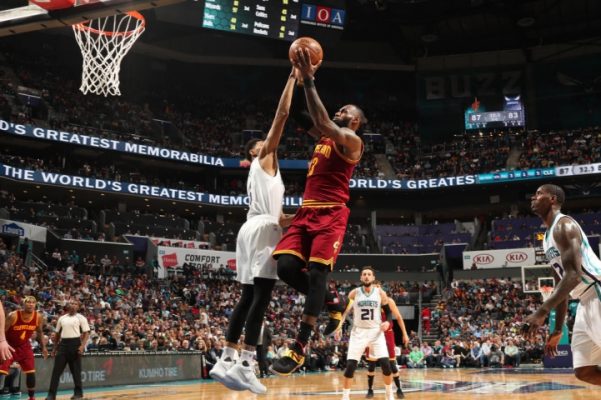 (Charlotte, NC) – The duo of LeBron James and Kyrie Irving combined for 58 points and 18 assists as the Cleveland Cavaliers closed out their four-game road trip with a 112-105 victory over the Charlotte Hornets at Spectrum Center on Friday night. The win clinched the Central Division for the Cavs for the third consecutive year and allowed them to split their four-game road trip.

James collected a double-double with 32 points and 11 assists and once again came close to making it a triple-double performance by grabbing nine rebounds. He also swatted away a pair of shots and his two free throws with 22.4 seconds left helped salt away the win.

“We were aggressive all night,” James said. “With all the injuries and adversity that we’ve had this year, it’s just a bunker mentality out there.”

During the physical contest, James was poked in the right eye and still had blurry vision after the game. ESPN’s Dave McMenamin indicated that he’d be seeing an eye specialist after the game.

Meanwhile, Irving tossed in 26 points and dished out seven assists, while Kevin Love added his own double-double with 15 points and 12 rebounds. No other Cavs player ended up scoring in double figures on the night.

“This is another step in the journey,” Irving said. “Tonight, we were just locked in, defending at a high level.”

Picking up the victory was the result of the Cavaliers navigating their way through some dry stretches that prevented them from taking control of the game. While they had strong ball movement, finished shooting 55 percent from the field and handed out 26 assists, one area where they struggled was on the offensive glass, with the Hornets holding a strong 14-3 advantage in that category. However, the team’s defense saw definite improvement from Wednesday’s loss, holding Charlotte to just 42 percent from the field.

“Down the stretch, we took some questionable shots, but the effort was definitely there and we took up the challenge,” Cleveland head coach Tyronn Lue said. “When we play small, you give up the offensive rebounds.”

The second half saw a number of odd stretches, where the Cavaliers would take a double-digit lead only to see the Hornets narrow the gap. On three different occasions, Charlotte either had a chance to tie the game or take the lead, but couldn’t break through. The last stretch came with the Cavs leading 99-87 with slightly under nine minutes left. The Hornets answered with a 12-1 run, but missed a free throw that would have tied the game at 100. From there, Cleveland scored seven points to give them some breathing room.

“We had attention to detail after watching film,” Love said. “We had a much better effort and we were helping each other out.”

The victory allowed the Cavs to remain ahead of the Boston Celtics, who had stood just one game behind entering Friday night’s action.

“They definitely have our attention, but whatever happens happens,” Lue said. “I’m not worried because if our team is healthy, we’ll be good.”

Irving also commented about the tight race for best record in the Eastern Conference, noting that the team wasn’t necessarily watching the scoreboard.

“Our focus has always been internally, but when we’re dialed in, we’re a tough team to beat,” Irving said. “We had that focus tonight.”