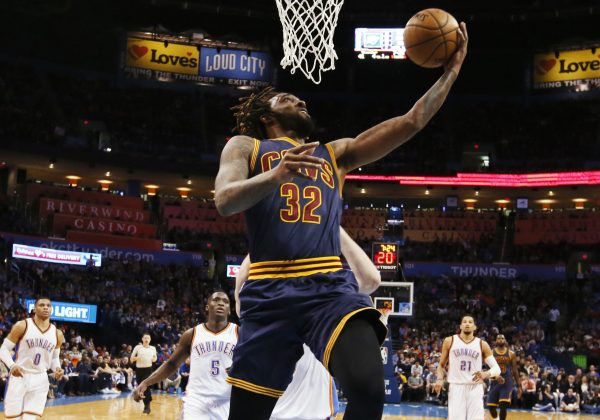 Having only been with the Cleveland Cavaliers for just over a day and seeing 22 minutes of action in Thursday night’s loss to the Oklahoma City Thunder, forward Derrick Williams already appears to have a strong chance of staying with the team according to Joe Vardon of Cleveland.com:

The 6-8, 240-pound Williams, who was drafted just after new teammate Kyrie Irving in the 2011 NBA Draft, is excited to be a part of the Cavs:

“This is my first day, but you can just feel the energy as soon as you step in the locker room,” WIlliams said. “Everyone is ready to play. That’s the championship mentality everyone has here.”

Despite Cleveland’s loss, Williams is hoping that being in with a winner will allow him to tap into the talent that made him the second selection of that 2011 draft:

“Tonight we didn’t get the win, but it was just a good flow,” Williams said. “I haven’t been in a good flow since I’ve been in the NBA and a lot of it is with losing, a lot of losing. We’ve been a lot of games under .500. When you come to a team like this, every game means something every single time you step on the court. I think that’s definitely what I’m missing so far.”

Williams was released by the Miami Heat on Monday, but was in contact with the Cavaliers shortly after he had passed through NBA waivers late Wednesday afternoon. Williams is now on his fifth NBA team, though he’s confident that he’ll eventually reach his potential. He’s averaged 9.1 points and 4.1 rebounds per contest during the course of his career.

“[Pat Riley] definitely still believes I’m going to be a great player in this league and I think so, too,” Williams said. “This is my sixth year and I’m 25 years old. I’m still learning, man. A lot of people in this league really get counted out way too early. Some of these guys are like 22, 23 years old. I have a lot of game left and I just want to prove on a team like this you just got to come ready to play every single game.”

Cavaliers head coach Tyronn Lue also sees the chance for Williams to finally deliver on his past promises:

“We just thought it was a good signing for us and he was a good player who I always liked,” Lue said. “His energy, his athleticism. What he does getting to the free throw line, driving the basketball.”

Williams’ next chance to impress Lue and his new teammates will take place on Saturday night, when the Cavs host the Denver Nuggets in a game set to tip off just after 7:30 p.m. ET. It will be the Cavaliers’ first game back after their 3-1 road trip.