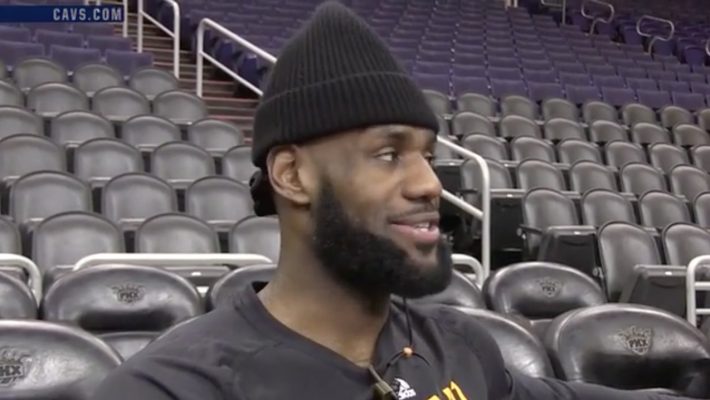 Cleveland Cavaliers forward LeBron James has often been described as a coach on the floor for his ability to grasp the flow of the game and make the right moves. Yet he harbors no interest in actually making that a reality whenever he decides to hang up his sneakers.

James was asked hours before Sunday night’s victory by the Cavaliers over the Phoenix Suns about whether he’s thought about the idea and he wasted little time in responding with an emphatic rejection.

Describing James as “a one-percentile guy when it comes to basketball intelligence,” Fizdale gave a simple and amusing reason for his opinion.

“No, he would kill somebody. Perfection is like (his standard). He wants perfection,” Fizdale said. “I could see him actually owning his own team and doing something like that, but I think (as a coach), he would end up killing a player at some point because they wouldn’t live up to the expectations that he would set forth.”

Such a belief isn’t out of the ordinary in any sport, since the belief is that great players often lack the patience to accept anything less than the greatness they have achieved.

As Fizdale noted, James is more likely to end up as the owner of an NBA team. That’s because his current net worth is estimated at close to $300 million, with a number of years left as a player to add to that amount on and off the court. If he does, he’ll be following in the footsteps of his idol, Michael Jordan, who is the current majority owner for the Charlotte Hornets.

Jordan grew up in Charlotte, which raises the question of whether James might consider a purchase of the Cavaliers following his retirement. Cavs owner Dan Gilbert has been rumored to possibly be considering purchasing the Detroit Pistons, which would offer an opening for James. However, nothing in that area is even remotely expected to happen within the next few years.