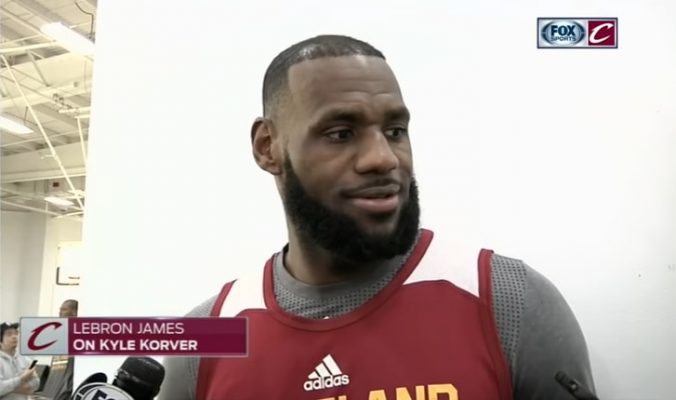 Cleveland Cavaliers superstar LeBron James has a long history of teaming up with great shooters toward the end of their careers and helping them reach their second prime.

He did it with a 37-year-old Ray Allen, who was a huge help to the Miami Heat’s 2013 title bid. He’s done it for years with James Jones, the sharpshooting forward who has been with James in the last six NBA Finals. Now he will have the chance to do it with his brand new teammate Kyle Korver.

In a recent interview with Fox Sports Ohio, James discussed how he feels about bringing a shooter of Korver’s caliber on board. The interview begins at the 0:26 mark below.

“He adds another dynamic piece to our team. Hell of a sharpshooter, and a great guy,” said James.

James is very familiar with the 14-year-veteran Korver’s game, as he and the Cavs have eliminated Korver’s former team, the Atlanta Hawks, from the playoffs two years in a row.

featuredkyle korverlebron jamesnews ticker
← Previous Story Timofey Mozgov: ‘To be honest I miss Cleveland. Everything was special there’
Next Story → LeBron James Gives Surprising Response When Asked If He’d Ever Become NBA Coach