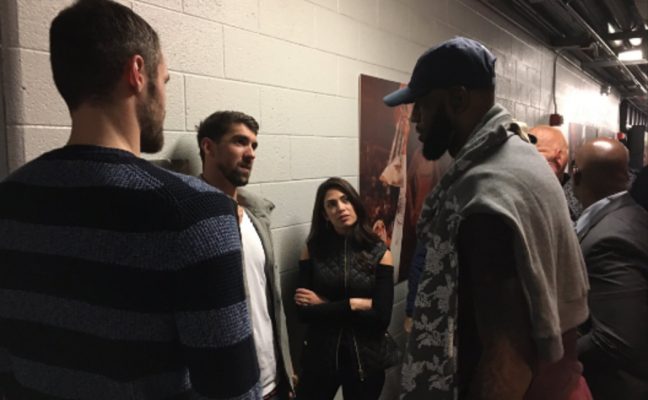 On Sunday evening at Talking Stick Resort Arena in Arizona, as the Cleveland Cavaliers took on the Phoenix Suns, arguably two of the greatest athletes on the face of this planet were in the same building, at the same time. One, a 23-time Olympic gold medalist in Michael Phelps, and the other a four-time NBA MVP and three-time NBA champion in LeBron James.

With the former watching the latter, James decided to put on a show in front of the Phoenix faithful, and especially, Phelps. With 11:23 remaining in the fourth quarter, James cut left and drove in for a vicious two-handed smash that sent the crowd into a frenzy. As he went down the floor on the other end to play defense, he gestured to Phelps as if to say, “That was for you.”

“I was talking with one of the kids next to me and we were saying there’s something different” Phelps said in awe of James’ greatness.

Cleveland’s prodigal son went on to finish the fourth quarter with 12 points including two ice-cold 3-pointers down the stretch run, which once again left Phelps in awe.

“He hit the 3 and he looked over again, it was funny,” Phelps told Cleveland.com. “The great ones always know how to get it done, no matter what sport it is. You take LeBron for example, no matter what, even in the fourth he just gets it done, you know?”

Since 2003, James is averaging the most fourth-quarter points (7.0) out of anyone in the league with teammate Kyrie Irving not too far behind at 6.2.