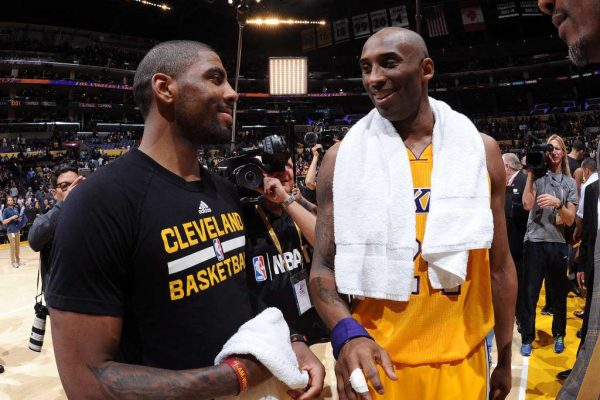 Cleveland Cavaliers point guard Kyrie Irving has often welcomed advice from teammate LeBron James, a partnership that’s led to one NBA title and a pair of appearances in the finals. However, Irving has also been influenced by another future Hall of Famer both on and off the court.

Irving spoke recently with Rachel Nichols of ESPN about a number of issues, including the influence that the retired Kobe Bryant has had on his career. That assistance played a role in Irving being able to ignore the criticism of shooting too much during last season’s NBA Finals. In Game 7, Irving’s ability to channel Bryant’s legendary focus allowed him to connect on the biggest shot in Cavaliers history, a 3-pointer that the Wall Street Journal called the greatest clutch shot in league history.

“Kobe’s been very influential in my life, just watching from the outside and now it’s turned into a mentorship,” Irving said. “It felt that much better because now I have direction. I started reaching out and asking for help rather than just being a stubborn young player and just trying to figure it out on my own.”

Admitting that the idea of having to ask for help was hard, Irving said it’s proven to be beneficial for the sixth-year guard.

“Absolutely. It’s hard to get over your own stubbornness, because you feel that you want to figure out the answer on your own,” Irving said. “Ultimately, there were other people put on this earth to help you to get you where you need to go or want to go, so why not utilize it?”

It’s likely as Irving goes deeper into what’s shaping up as a Hall of Fame career that he’ll be mentoring younger players just like Bryant is doing currently. Hitting the game-winning shot in Game 7 of the NBA Finals will garner him instant credibility with anyone that chooses to listen to his advice.