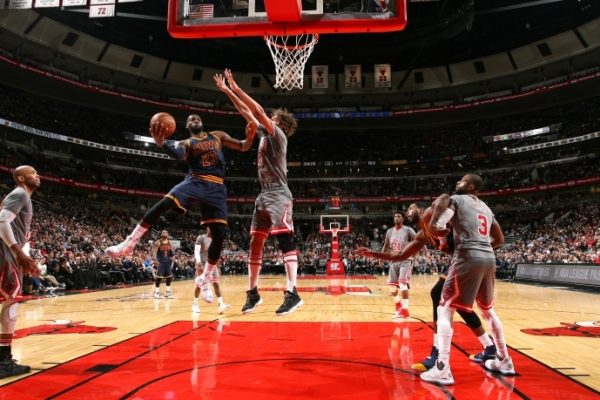 (Chicago, IL) – An inability to keep the Chicago Bulls from scoring in the paint and not controlling the rebounding front sent the Cleveland Cavaliers to their third consecutive loss in a 111-105 defeat at United Center on Friday night.

The Bulls collected 78 of its 111 points in the paint and dominated on the boards with a 49-33 advantage, including a 16-6 lead on the offensive side that allowed for numerous second-chance points.

In addition, the Bulls finished with 31 assists, though the Cavs kept pace in that category with 30 on the night. On the other hand, Cleveland again struggled in the area of turnovers, committing 18 on the night.

“We have to do a better job of guarding one on one,” Cavaliers head coach Tyronn Lue said. “Right now we’re getting exposed at every position.”

The loss marks the first time since last December that Cleveland has sustained a three-game losing streak. In each of its three losses, the third quarter has proven to be costly as the Cavaliers watched a 60-59 halftime lead against the Bulls fade to end up trailing 88-80 by the end of the quarter.

“You have to battle every night,” an irritated LeBron James said after the game. “The honeymoon stage is over, it’s time to play real ball. We’ve got to man up. Everybody.”

In the final period, the Cavs got the margin down to three points on multiple occasions but couldn’t get any closer.

“On both sides of the ball, we just have to be better,” Love said. “We have to push back, we have the the next-man-up mentality. It shouldn’t be hard.”

Rounding out the double-digit scoring were Tristan Thompson with 11 points and six rebounds and Channing Frye, who came off the bench to match Thompson’s point total.

“We have to help each other out, communicate better. We have to be better in all facets of the game. Offensively, defensively and everything in between,”James said. “We have to stay with the process and continue to get better every day. My message hasn’t changed.”

Little defense was evident during the opening nine minutes of the first quarter as the Cavaliers managed to connect on 72 percent of its shots and the Bulls countered by hitting at a 59 percent rate. A combination of cooling off and sloppiness closed out the final three minutes with Cleveland holding a 33-30 advantage.

In the second quarter, the Cleveland was able to boost its lead to as many as eight, though four more turnovers gave Lue’s unit a total of 11 in the first half. The Cavaliers left the court holding a slim 60-59 lead.

“We have to do a better job of shrinking the floor, ” Lue said.

Cleveland is again on the road for its next matchup, though that contest won’t take place until Monday night against the Toronto Raptors. Tipoff for that clash between last year’s Eastern Conference finalists will be just after 7:30 p.m. ET.