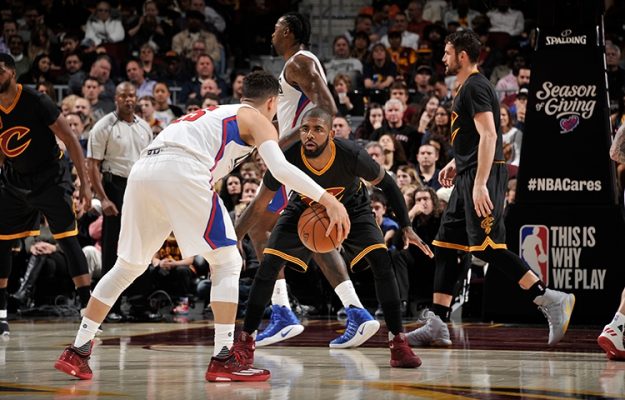 (Cleveland, OH) – Continued struggles on defense and sloppy play, which resulted in 18 turnovers on the evening, sent the Cleveland Cavaliers to their second straight defeat in dropping a 113-94 decision to the Los Angeles Clippers at Quicken Loans Arena on Thursday night.

Los Angeles managed to dish out 33 assists on the night and forced Cleveland into numerous errors, while staying aggressive throughout the game. The defense for the Clippers was strong enough to end the Cavs’ streak of 16 games with at least 10 3-pointers made per game to start the season, which had established a new league record.

“They’re a hungry team. They lost three in a row and were ready to play,” Lue said of the Clippers.

The Big Three of LeBron James, Kyrie Irving and Kevin Love again was forced to carry a huge portion of the Cleveland offense, with the bench contributing just eight points during the first three periods. Irving had a team-high 28 points, while James and Love contributed 16 points apiece.

“We have to be a little more greedy going for the defensive ball, myself included,” Irving said. “There’s definitely some adjustments to be made. We just need to watch some film and take care of it.”

While Tristan Thompson snagged eight rebounds, he and J.R. Smith only managed to add three points apiece to the Cavs’ scoring ledger.

“They were able to get to the foul line, get into the bonus and they had a ton of assists,” Love said after being asked to try and explain the loss.

Following a fairly even first quarter that saw the Cavaliers hold a 28-24 advantage, the Clippers revved up their ball movement in the second period by dishing out 12 assists. That gave them 19 for the half and with the 58 percent shooting during the quarter, they were able to take a 58-50 lead into halftime.

“We’ve been getting off to good starts, but we have to be able to maintain that into the second quarter,” Lue said.

The Cavaliers only managed to shoot 37 percent during the second period and magnified the shooting differences by committing nine turnovers over the course of the half. Their defense didn’t seem to have an answer for J.J. Redick, who managed to score 21 points in the first half, all coming from long-range.

“Redick hurt us. He’s a great mover without the ball.” Lue said. “Sometimes we’d miss some coverages when we left him wide open. I just thought his movement in the first half really hurt us.”

Things got worse for the Cavs when play resumed as the Clippers went on a 13-2 run in the first five minutes. Their aggressive play saw them grab eight of the first 11 boards in the third quarter to take a 71-52 lead, a surge aided by the Cavaliers missing their first five shots and committing five more turnovers.

“We couldn’t get into a rhythm, we got into some foul trouble and they broke our rhythm,” James said.

The Clippers would lead by as many as 21 before heading to the fourth quarter holding an 85-65 lead. They shot only 40 percent from the field during the period, which was still better than the Cavs’ 36 percent in those 12 minutes. During garbage time in the fourth quarter, Los Angeles managed to extend its lead to as many as 26 at 104-78 with 5:36 left. Richard Jefferson‘s trio of 3-pointers in the final three minutes helped reduce the final margin, but it was still too little, too late.

“In this league, you always have another game,” James said. “Three losses in a row? Then we’ll have something to talk about.”

The Cavaliers don’t have much time to think about this contest with a road matchup against the Chicago Bulls scheduled for Friday night that will tip off just after 8 p.m. ET. That will be the first meeting of the year between the division rivals, with James’ old friend, Dwyane Wade now donning a Bulls uniform. Cleveland will seek to avoid their first three-game losing streak since last December.