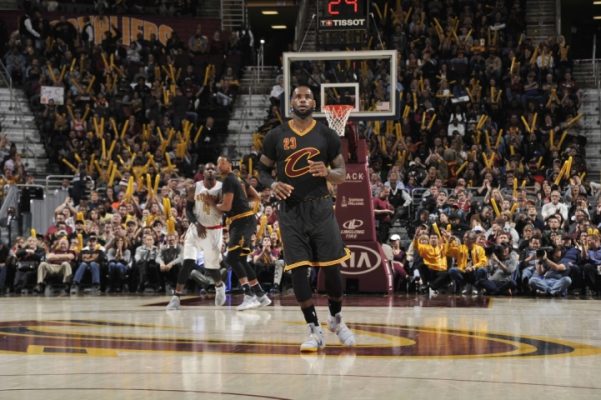 (Cleveland, OH) – Despite forging a pair of second-half comebacks, the Cleveland Cavaliers couldn’t get over the hump and suffered their first defeat of the 2016-17 regular season, losing 110-106 to the Atlanta Hawks at Quicken Loans Arena on Tuesday night.

The Cavaliers looked to be on the verge of getting blown out, trailing 66-48 with eight minutes to play in the third quarter. That margin got continually smaller as the period progressed, eventually being reduced to just two points at 81-79 with 6.7 seconds remaining on a three-pointer by J.R. Smith. However, Iman Shumpert was whistled for a costly foul with 0.6 seconds remaining that resulted in three free throws, allowing Atlanta to take an 84-79 lead heading into the final quarter.

That helped spark the Hawks in the opening minutes of the fourth as they went on a 12-2 run that once again seemed to put them in control. That proved to be premature as the Cavs, over a five-minute span, chopped the margin to just three at 98-95 with 3:45 remaining. Atlanta then answered with a 9-2 run, with one final surge by the Cavaliers coming up short. The Hawks led 108-106 with 25.2 seconds to go, but Kent Bazemore’s jumper from the right corner with 6.8 seconds left served as the dagger for Cleveland.

Asked about the comebacks, Kevin Love spoke about the difficulty in being able to sustain that momentum over an extended period.

“We let up a little bit, and they have some different lineups they can work with to adjust,” Love said. “They made the big shots when it counted and we just have to play better in the future.”

LeBron James remarked after the game that the slow start in the fourth quarter was costly and indicated the odd pace of the game.

“In the fourth quarter, we didn’t start the way we should and it cost us,” James said. “It was a weird game.”

The Big 3 of Kyrie Irving, James and Love combined for 76 points on the evening. Irving led all scorers with 29 points and four assists and Love contributed a double-double with 24 points and 12 rebounds. James’ 23 points, nine rebounds and five assists were joined by Channing Frye’s 13 points, the only other Cavs player to score in double figures.

“Defensively, we had problems defending the pick-and-roll,” Lue said. “Plus, we have to do a better job of boxing out and getting offensive boards.”

Despite a pair of three-pointers on the night, Smith endured a rough night from the field, connecting on just 2-of-13 shot attempts. Meanwhile Tristan Thompson’s contributions were even more non-existent with two rebounds and zero points to show for his 24 minutes on the court.

James also pointed out the problems afterward, noting both the Cavs’ three-point shot in the first half and their overall sluggish play.

“We were 4-of-20 on three-pointers and had no rhythm in our offense,” James said.

Lue added to the cause of the team’s problems on the night after the game.

“I just thought we didn’t respect these guys (Atlanta), and when we did it was too late,” Lue said. “They came in and attacked us and you have to expend a lot of energy coming back. Offensively, I thought we got open shots, but we just didn’t make them.”

The Cavaliers will next be in action on Friday night when they face the Washington Wizards in a game set to tip off just after 7 p.m. However, on Thursday, the team will be honored at the White House by President Barack Obama in recognition of the team’s NBA title from last season. The time of the ceremony has yet to be indicated, though it will be available for viewing on Whitehouse.gov/live.