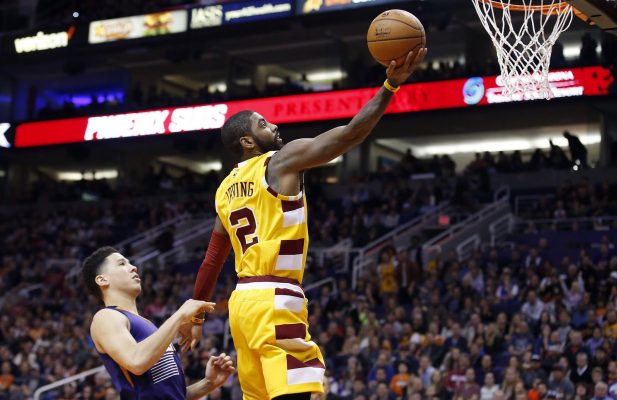 Kyrie Irving is slowly starting to to take over the NBA.

He’s an NBA champion, an Olympic gold medalist and is currently leading the Cleveland Cavaliers in scoring with 26.8 points per game.

As a result, the Cavs have cruised through their first four games of the season to a perfect 4-0 record. While LeBron James is still the anchor of this team on both ends of the floor, it’s become apparent that the Cavs are clearly a better team when Irving is the main scoring option.

Over the previous two seasons, including the regular season and playoffs, the Cavs have amassed a 70-23 overall record when Irving reaches 20 points or more in a game. Over that same period of time, the Cavs are 27-15 when Irving is the leading scorer on the team.

While the 27-15 record may not seem all that impressive on its surface, that would equate to 52 wins in an 82-game season; and a few of those 15 losses came in the playoffs, where the competition is much stiffer.

This season, the Cavs have shown that making the 24-year-old their primary scorer is a top priority. Even head coach Tyronn Lue acknowledged this fact after the first game of the season, which was a 117-88 win over the New York Knicks where Irving led the team with 29 points.

“Like I’ve always said since I’ve taken over, Kyrie is unstoppable,” said Lue. “I don’t think one defender can guard him. In the pick-and-roll he’s unstoppable. He has no offensive weaknesses. So for this team to be successful, I need him to be a scorer. I need him to be in attack mode at all times. You can see, when he scores, how the game just opens up.”

Lue might actually be underplaying just how much the game opens up when Irving is the leading scorer. Not only does Irving’s scoring allow other players to excel in their respective positions, it actually opens things up for him to score more easily as well, mainly by allowing James to do the things he does best.

When the three-time All-Star has it going, all eyes of the defense are on him, meaning that teams can no longer double-team James in the post. And having James in a one-on-one situation in the post is still the most effective offense in the world.

The four-time MVP can score easily from the post and is an elite passer from the block. And if teams do attempt a double-team, that simply creates more room for Irving to attack, putting teams in an absurd catch-22 position: Either allow the best player in the world to operate from his favorite spots on the floor in a one-on-one, or allow the best bucket-getter in the NBA to roam freely and choose his shots.

Also, when Uncle Drew is getting buckets, the onus to score points does not fall on the four-time champion’s shoulders.

If James does not have to focus on scoring, he can play his favorite role, which is an all-around dominator. James can easily rack up the assists, rebounds, blocks and steals. He can focus on the defensive end and lock up the opponent’s best players. He can crash the offensive boards and when he does decide to shoot, it can be off of looks he feels most comfortable with.

And that strategy has already paid off, as he is already on pace for career-highs in both rebounds and assists.

Of course, when Irving is looking to score, it opens up way more than just being able to isolate King James.

In pick-and-roll situations, the former Duke University Blue Devil is among the league’s elite at being able to execute. He is a very good passer in that situation, and thanks to a dynamite pull-up game and ability to shoot off the dribble, Irving is arguably the best scoring guard coming off the pick.

The area with the most room for growth in the offense is when Irving is coming off of a pick from forward Kevin Love. That’s because Love has the ability to either roll and score from the post or pop out to the 3-point line and completely annihilate defenses.

Furthermore, an Irving-Love pick-and-roll greatly distorts defenses, leaving players like J.R. Smith, Mike Dunleavy and Iman Shumpert wide open. And even if those wide-open shots miss, the distortion of defenses allows Tristan Thompson to do what he does best, which is crash the offensive boards and create second chances for the defending NBA champions.

If teams can somehow figure out a way to slow down Love off of the pick-and-roll and also keep guarding perimeter jump shooters, then the only logical thing left is to leave Irving wide-open from mid-range, where he is one of the best players in the league.

Of course, when Irving isn’t looking to score, things can fall apart pretty quickly on offense for the Cavs.

Teams can simply sag off of pick-and-rolls or Irving’s defender can go underneath screens like teams do with players like Michael Carter-Williams or Rajon Rondo. Teams can double-team James in the post without worrying about the repercussions of rotating on the back side. Also Love wouldn’t get open looks as easily inside or outside, and those spot-up shooters will see wide-open shots turn into contested ones.

And when the 24-year-old point guard isn’t looking to score, that burden falls to James. While the 12-time All-Star is more than capable of fulfilling that role, at this point in his career, it’s not what suits him best.

“It’s like it’s the same. Shaq was already established and was older than Kobe, and he was the most dominant player in the league. And Kobe was always striving to be better — to be the best player ever,” said Lue. “After winning the championship last year, Kyrie had the chance to go win the gold medal. Coming back this year, you can tell he’s really worked on his game — and he’s worked on his body.

“He wants to take that next step. He’s very capable of doing it.”

For Irving, it seems as though taking the next step is by taking over the offense and leading the Cavs in scoring.

If he can do that, it will be extremely hard for any team in the NBA to stop the Cleveland Cavaliers from repeating as NBA champions.

cleveland cavaliersfeaturedkyrie irvinglebron jamesnews ticker
← Previous Story Is Kyrie Irving the Most Clutch Player in the NBA?
Next Story → 5 Point Guards Cavs Could Be Looking to Target in December