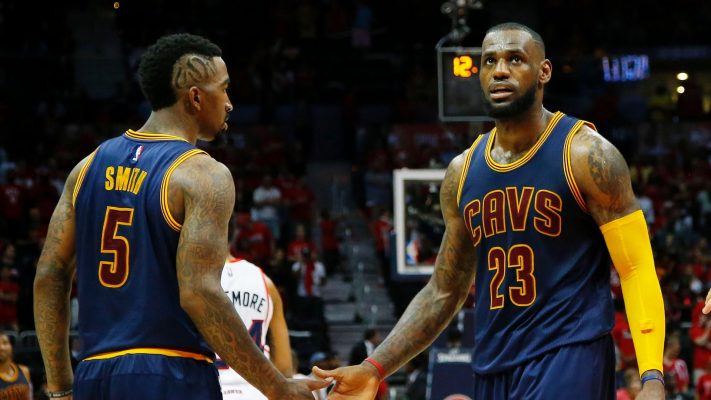 The lingering contract negotiations between the Cleveland Cavaliers and free agent shooting guard J.R. Smith is finishing up its third month with no apparent deal in sight. In an effort at getting a deal done, LeBron James is offering his blunt opinion on which side he favors.

Jason Lloyd of the Akron Beacon Journal notes that James spoke to media on Friday about the subject and expressed frustration over the glacial pace toward an agreement.

“I hate coming into another season – two years in a row – with one of my big guns not here,” James said. “So for a leader of a team and for me personally, I just hate to deal with this s— again. It’s just too big of a piece to our team to have to deal with in another training camp. Hopefully things get resolved fast, because you know how big and important he is to our team.”

James is referencing the fact that Tristan Thompson missed all of last year’s training camp in a similar contract dispute. Like James and Thompson, Smith is represented by Rich Paul, who eventually got close to what he was seeking with Thompson last year.

Providing examples of Smith’s value to the team, James put the onus on Cavaliers management when it came to the impasse.

“Negotiations are always two sides, but J.R. did his part,” James said. “He showed up every day. Worked his ass off every day. Became a two-way player, a model citizen in Cleveland and he’s a fan favorite. Obviously we all know that. … He’s a big piece of our team and they just need to get it done.”

Using the analogy of a real estate sale, James cited the fact that Smith not receiving any offers didn’t necessarily guarantee that he would return to the team.

“You can go find a house, you do all the negotiations and all that, but you never got the house until it’s closed and you got the keys,” James said. “Last minute someone can step in. Escrow could fall through or something. Then it ain’t your house no more. So, J.R. is a free agent. He’s not ours. He’s still my brother right now. And I feel like when I play 2K17 he’s still on the Cavs, so he’s on my roster there, but it wouldn’t be good if he was not here. It wouldn’t be good for any side.”

While the Cavs’ preseason schedule starts next week, their regular season doesn’t get underway until October 25.