Report: Sources Within Cavs Organization Give Update on Possibility of Kevin Love Trade 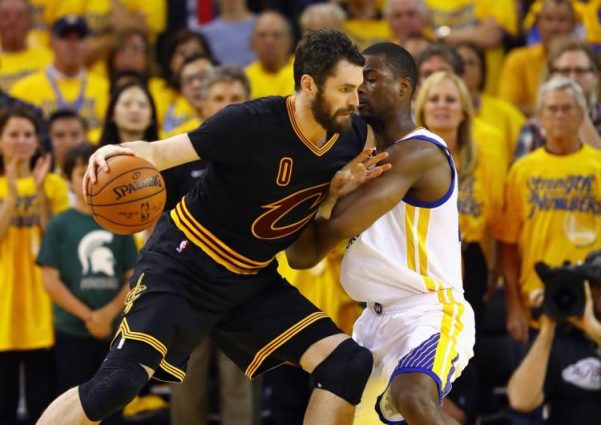 From the earliest days of his tenure with the Cleveland Cavaliers, Kevin Love’s status with the team has been the subject of endless speculation. During the first year, it was due to his pending free-agency status, while his second season occasionally caused controversy-seeking media and frustrated fans to suggest dealing him elsewhere.

That line of thinking hasn’t made it to the office of Cavaliers general manager David Griffin, according to Basketball Insiders. Looking at a number of players supposedly in line to be traded, the site quotes sources who indicate that the idea of sending Love elsewhere “is not even remotely a consideration.”

“While there are no shortage of suitors who would take on Love’s contract, sources close to the Cavs say moving him is not even remotely a consideration,” says Steve Kyler of Basketball Insiders.

Such thinking probably should have been put to rest two months ago during the Cavs’ championship celebration. Both Griffin and LeBron James specifically mentioned Love’s contributions during their respective speeches to fans, most notably Love’s harassing defense on Golden State guard Stephen Curry in the final minute of Game 7 of the NBA Finals.

Even before that memorable moment, Love’s contributions as part of Cleveland’s Big 3 with James and Kyrie Irving were evident from the team’s record when all three play together.

In the wake of some outrageous contracts during the recent free-agency splurge, Love’s remaining four years that will pay him a little over $93 million is likely seen by other teams as manageable. Plus, Love has shown that he’s capable of putting up strong offensive numbers in certain situations.

Some of the rumors that continue to be floated are likely meant to knock down any perceived asking price for Love. The problem is that those quoted sources and Love’s own desire to stay with the Cavaliers should completely negate any further recognition of such speculation.

At present, the only player that Griffin is likely focused on is free agent J.R. Smith, who is still looking for a deal that will pay him roughly $15 million per year.