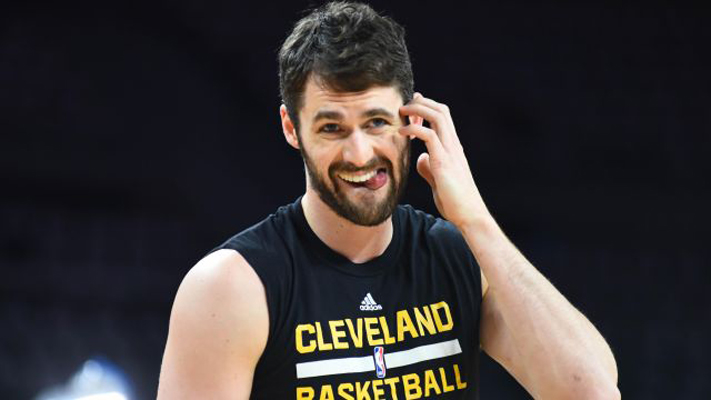 Ever since he arrived from Minnesota two years ago, the status of Cleveland Cavaliers forward Kevin Love has been a constant source of debate. For much of that first year, his uncertain situation after 2015 was fodder for every bit of gossip, with body language, tweets and teammate photos sparking endless speculation.

Ultimately, Love chose to re-sign with the Cavaliers on a five-year deal for $113 million. He was coming off a shoulder injury that cut short his first season with the team, one of two key setbacks that conceivably cost them a shot at an NBA title. However, the Cavs needed to get his name on a contract simply to avoid the embarrassment of giving up the top pick of the 2014 NBA Draft, Andrew Wiggins, in exchange for him.

What Cleveland got this past year was virtually identical statistical numbers from his first year, yet complaints continued about how Love didn’t fit in or how he played terrible defense. That was usually followed by suggestions that the Cavaliers trade him.

Yet with the entire season potentially on the line, it was Love’s defense on Stephen Curry in the final minute of Game 7 in the NBA Finals that played a role in setting up the clinching free throw to give the Cavs the title.

That memorable moment was recalled by both Cleveland general manager David Griffin and LeBron James during the team’s victory parade three days later. For once, that seemed to eliminate any further talk of Love being dealt.

That lasted for a few days until the allure of the Cavaliers somehow signing either Kevin Durant or Dwyane Wade as a free agent was bandied about. The only possible way either was going to happen was dealing Love and his huge, but now seemingly reasonable, contract. In the end, neither rumor came true.

No more talk of trades, right? Wrong. Fans and pundits quickly moved onto the Sacramento Kings’ DeMarcus Cousins as a possible Cavs acquisition. That proposed deal had Love and Iman Shumpert being sent to the Kings in exchange for Cousins and Ben McLemore.

Such a deal has no chance of taking place for two reasons, the first being Griffin’s statement that Love wouldn’t be dealt. Obviously, that guarantees nothing, but Griffin has spent the past two years perfecting a chemistry experiment that resulted in the ultimate prize last month and volatile chemicals sometimes work and sometimes don’t.

The second reason this won’t occur is because James has forged a bond with Love that was evident immediately after the final horn sounded in Game 7. The thought of moving Love out for a player who, regardless of his immense talent, is a handful to deal with, is not a recipe for defeating the likes of the revamped Golden State Warriors.

From the talent perspective, Cousins tops Love. Yet he has similar scoring numbers to what Love had in Minnesota, with Love subsequently having to sacrifice a portion of that output to become part of Cleveland’s Big Three. Would Cousins willingly do the same or would his clubhouse cancer persona emerge again, helping torpedo any chances of repeating as champions?

Another person to consider in this proposed deal is Cavaliers head coach Tyronn Lue. Once he took over the team in January, he wasn’t afraid to call out James, which is seemingly unthinkable. He also helped motivate Love for the team’s playoff run and likely doesn’t relish the thought of dealing with a player who essentially got George Karl fired due to his insubordination.

One of the few other destinations that Love could go to is Boston, which has been rumored since he arrived in Cleveland. The problem with this scenario is that the Celtics appear to be continually low-balling the Cavs, supposedly offering Avery Bradley or Jae Crowder, along with future draft picks.

The problem is that the Cavaliers are built for the 2016-17 campaign. That means that even the enticing possibility of receiving Boston’s likely lottery pick next year as part of the package simply isn’t worth the hole in the lineup that suddenly develops.

Given the high level of success, the trio of James, Love and Kyrie Irving have when they play together, it makes little sense to mess with that formula, especially since the most recent performance has resulted in a championship banner that will be raised this fall at Quicken Loans Arena.