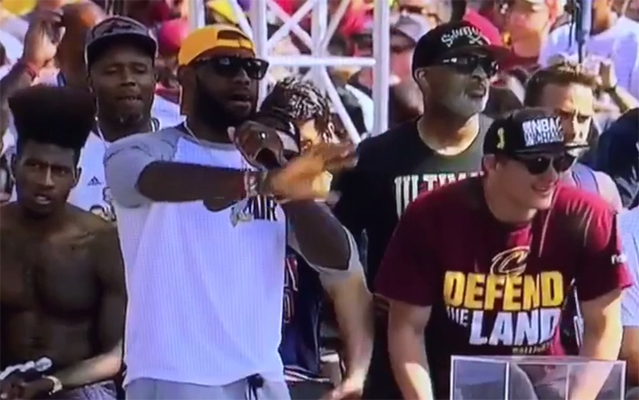 During the Cleveland Cavaliers‘ championship parade on Wednesday afternoon, LeBron James took the courtesy of thanking each player on the team for their contributions during the Cavs’ championship run.

When it was power forward Kevin Love‘s turn to be congratulated, James emphasized the stop that his teammate had in Game 7 when he played astounding defense on Golden State Warriors point guard Stephen Curry.

Although not show in the clip above, James wanted to let the fans know that his power forward stopped the unanimous “MVP” and then added the phrase, “just throwing that out there.”

And even though many basketball fans may think that the three-time NBA champion comes off as “cocky” or “arrogant,” after delivering an NBA title to a city that’s been the butt of all jokes in the sports world for over 50 years, Cleveland’s prodigal son can say damn near anything he wants to at this point.