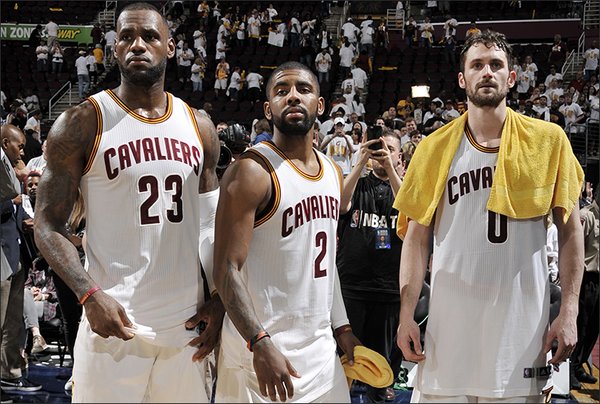 Nobody likes losing. Especially not when that loss comes in Game 1 of the NBA Finals.

But what’s worse than losing is having to constantly be reminded about that loss while not having an opportunity to avenge the outcome.

These last two days have been just that for the Cleveland Cavaliers. Thursday night, the Cavs suffered a loss to the hands of the Golden State Warriors by a 104-89 final. And since the final buzzer sounded, the only thing on their minds has been on returning the favor in Game 2.

“I think we are all eager. There comes a point where you have the two days in between and you’re thinking about it, trying to find ways to get away from it while still being locked in,” said Kevin Love. “We come here and keep talking about the different adjustments, but now we want to go out there and make it happen. You kind of speak it into existence and hold yourself accountable, but nothing can really happen until you can go out there and face your opponent.”

“Well nobody likes losing. It’s like if your parents gave you a Christmas gift and then they snatched it from you. So just imagine that feeling,” said Channing Frye. “We have a lot of days to think about what went wrong and we have days to work on our bodies and come out here and get some shots up. We’ve got to make sure we take advantage of today.”

Kyrie Irving echoed Frye’s statements, and also added that he understands why the layoff is a good thing for the NBA and its fans.

“From a mental standpoint, it’s a little too long,” said Irving. “But from a physical standpoint it’s been great. I know the league wants to see everyone playing at the top of their games at the highest level as healthy as they can.”

For head coach Tyronn Lue, the extra preparation time has been great. It has afforded him more time to study the film, breakdown weaknesses and formulate different game plans.

“It’s been very productive. Just watching film. Just going over the things we need to get better at. There were some good things. There are some things we need to clean up and get better at,” said Lue. “We need to try to take away their easy baskets. They’re going to score points because they are a great team but we can’t gift them baskets.”

The idea of having to re-watch all the mistakes the Cavs made in Thursday’s game, as well as consistently answering questions about those mistakes can be mentally draining, and can even take some fun out of playing in the NBA Finals.

But leave it to Frye, an 11-year NBA veteran playing in his first finals, to serve as a reminder that this opportunity often comes around just once in a lifetime, and that it absolutely should be enjoyed.