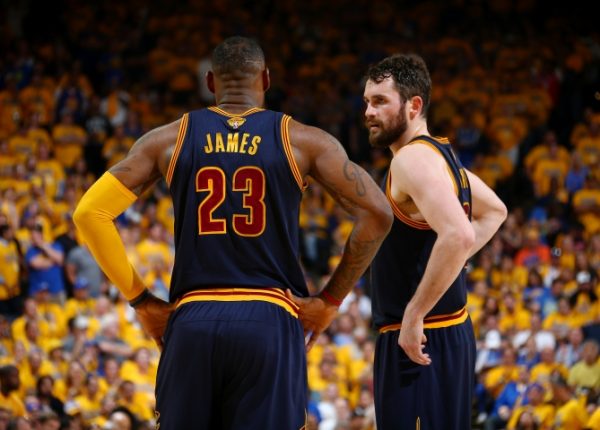 (Oakland, CA) – Allowing 15 unanswered points over a four-minute span was a key factor in the Cleveland Cavaliers dropping a 104-89 decision to the Golden State Warriors in Game 1 of the NBA Finals on Thursday night.

Kyrie Irving led all scorers with 26 points for the Cavs, while the trio of LeBron James, Kevin Love and Tristan Thompson each picked up a double-double on the night. James had 23 points, 12 rebounds and nine assists, while Love added 17 points and 13 boards. Thompson rounded out the trio with 10 points and 12 rebounds.

Cleveland was severely handicapped by virtually no production (10 points) from their bench and little from J.R. Smith, who scored only three points—on a three-pointer in the final five minutes of the game. For the game, the team collectively shot just 38 percent and was only 7-of-21 (33 percent) from beyond the three-point arc.

“Sometimes your offense dictates the defense,” James said afterward. “Giving up 25 points on 17 turnovers isn’t a good ingredient for our offense.”

The Cavaliers had tightened up their defense after the halftime break, holding the Warriors to just 27 percent shooting in the first eight minutes of the third quarter. That allowed the Cavs to take the lead for the first time since the opening moments of the contest.

The two teams then kept trading the lead back and forth, with the Cavaliers last leading at 68-67 with 2:12 left following a James layup. Golden State then began their surge by hitting five of their last eight shots in the period. That gave them a 74-68 advantage with 12 minutes remaining.

“In the second half, we came back and were really aggressive and really physical,” Cavaliers head coach Tyronn Lue commented after the game.”We took LeBron out for a few minutes and the game kind of got away from us.”

Cleveland’s chances of pulling out the victory then faded in the first few moments of the final quarter as the Warriors hit seven of their first eight shot attempts. The Cavs would eventually trail by as many as 18, though a brief comeback gave them a chance to cut their deficit into single digits with just over three minutes to go. In that instance, a turnover and subsequent Cleveland miss were converted into Golden State three-pointers to salt the game away.

“They really thrive off their bench and that’s ultimately what won it for them tonight,” Love said after the game.

Although the Golden State backcourt of Stephen Curry and Klay Thompson were considered the biggest threats to the Cavs, it was a balanced scoring attack that helped doom the Cavaliers. Eight different Warrior players scored in double figures, led by reserve Shaun Livingston with 20. Lue spoke about how Livingston emerged with such a huge game.

“We tried to keep a bigger defender on him, but he got to his spots and he hurt us tonight,” Lue said. “We have to make it harder and be more physical with him.”

The Cavaliers will be off until Sunday night when they look to tie the series in Game 2 at Oracle Arena. That game will tip off just after 8 p.m. ET.

“I’m looking forward to the film session and seeing what we can do better for Game 2,” James said.