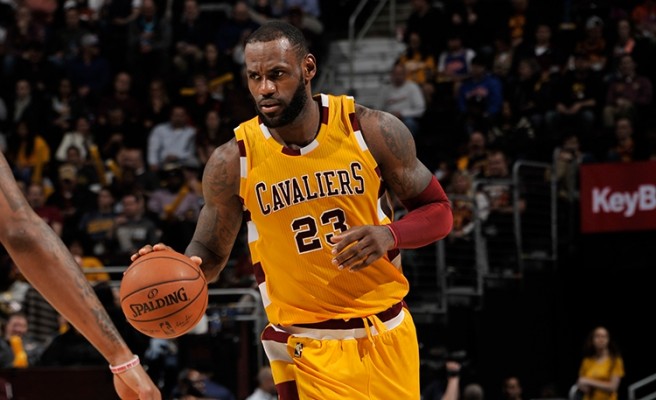 (Cleveland, OH) – Bolstered by a combined 69 points from Kyrie Irving and LeBron James, the Cleveland Cavaliers clinched the best record in the Eastern Conference with a 109-94 victory over the Atlanta Hawks at Quicken Loans Arena on Monday night.

The win guarantees the Cavaliers home-court advantage in each of the first three series, should they advance. Last season, a slow start resulted in them finishing with the second-best conference record, though they ended up making the NBA Finals.

Irving ended the night with 35 points (adding four assists) to lead all scorers and matched his previous season-high, accomplished against the Los Angeles Lakers on February 10.

Cleveland head coach Tyronn Lue spoke about Irving’s ability to bounce back after struggling in Saturday night’s loss at Chicago:

“Kyrie’s a competitor. I’m glad he had a great game tonight.”

James’ 34 points were complemented by another torrid shooting night that saw him make 13-of-16 from the field, while also grabbing six rebounds and picking up three steals.

“If two of our three guys are going, we’re in good shape,” Lue said. “Our bench came in (in the fourth quarter) and did a great job and it gave ‘Bron some minutes off.”

Over the last 11 games, James has hit on better than 62 percent of his outside shots. He spoke about his ability to turn up the level of his game heading into the postseason.

“Flipping a mind switch. Just go into the gym even more. Focus in and dial it in more on what needs to be done to make us better,” James said. “I’ve been in this league a long time, I know what I need to do.”

The key to the win, besides the efforts of James and Irving, was the effective outside shooting over the middle two quarters, with the Cavs hitting a combined 62 percent from the field during those two periods.

Cleveland took the game over in the final six minutes of the third quarter, going on a 19-5 run to change a tight 68-66 lead into an 87-71 cushion. The margin never again got below double figures, helping the Cavaliers improve to 57-24 on the year.

Not surprisingly, James was the spark that broke the game open, scoring 17 points during that third quarter. That included nine consecutive points midway through the period.

“If he (James) plays like this man, we’re gonna be tough to beat,” Lue commented. “He’s just taking it to a whole other level.”

The Cavaliers struggled with their outside shot during most of the opening quarter, missing 5-of-6 at the outset and ending it by connecting on just 38 percent of their shots for the period. That resulted in them twice falling behind to the Hawks by as many as 10, the last coming at 20-10 with just over four minutes left. They were able to cut it to 26-22 by the end of the quarter.

Warming up considerably in the second period, the Cavs connected on 71 percent (12-of-17) of their shots and held Atlanta to 32 percent shooting to take a 51-45 lead at intermission. They also forced 10 turnovers, but one negative was that they were again completely blanked on the offensive side of the boards.

“It hasn’t been perfect to say the least. We’ve dealt with a lot of ups and downs, peaks and valleys,” Irving said. “But we’re a resilient team and we care about each other in that locker room and that’s all that matters.”

The Cavaliers close out the regular season with a home matchup on Wednesday against the Detroit Pistons. Tipoff for that clash will be at a special time of just after 8 p.m. ET.