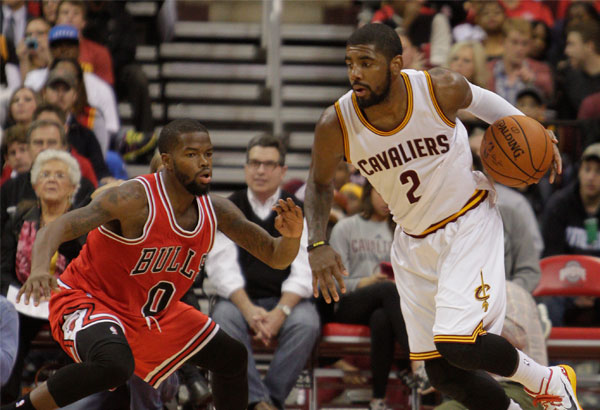 (Chicago, IL) – A near miraculous comeback came up short for the Cleveland Cavaliers as they dropped their second straight game, this one, a 105-102 defeat at the hands of the Chicago Bulls at the United Center on Saturday night.

Trailing 104-96 with 1:15 left, the Cavs roared back and had a chance to get to within one with 8.7 seconds left when J.R. Smith went to the foul line for two free throws. Smith made the first shot, missed the second but got the rebound. However, Matthew Dellavedova’s three-point attempt was an airball, which resulted in a quick foul of Chicago with 1.6 seconds to go. Pau Gasol split his two attempts, giving Cleveland one last shot to tie it, but Smith’s desperation 30-footer was also an airball.

“When they kicked it out to Delly, I was thinking I would have loved to be in that position,” LeBron James said after the game. “Selfishly, the way I was shooting (13-of-17), I wish he would have made one more pass.”

That ill-fated comeback was necessary due to a disastrous stretch during the first portion of the fourth quarter when the Cavs allowed 15 unanswered points. The Cavaliers led 84-82 following a pair of Timofey Mozgov free throws with 10:47 remaining, but five straight missed shots and a trio of turnovers allowed the Bulls to take their biggest lead of the game at 97-84 with just under six minutes left.

“Giving up 13 offensive rebounds and 26 points on 16 turnovers is hard to combat when you’re trying to win,” said Cleveland head coach Tyronn Lue.

Had the Cavs emerged with a win, they would have clinched the top seed in the Eastern Conference. However, they now have just a two-and-a-half game lead over Toronto, with the Raptors’ final three opponents being the New York Knicks, Philadelphia 76ers and Brooklyn Nets. Those weak opponents mean that Cleveland will have to win one of its final two games since they lose a tiebreaker should the two teams finish in a tie.

James led all scorers with 33 points and added seven rebounds, while Smith finished with 24 points, including seven three-pointers. Kevin Love contributed another double-double with 20 points and 13 assists, with Kyrie Irving rounding out the double-figure quartet with 11 points and a game-high eight assists.

Irving was blunt about for his three fourth-quarter turnovers:

“I was just real shitty with the basketball. The handle wasn’t crisp,” Irving said. “I’ve just got to do a better job.”

After Chicago took a brief lead in the first 15 seconds of the second half, the Cavs put together a 16-4 run that gave them a 70-59 lead less than five minutes later. That margin would be whittled away, with the Bulls deadlocking the game at 79 in the final minute. However, James’ three-pointer in closing seconds gave them a three-point advantage entering the final period.

“We want to work on these last couple of games and get ready for the playoffs when they get going next Saturday or Sunday,” James commented.

The Cavaliers now come home for those final two games, hosting the Atlanta Hawks on Monday night in a game set to tip off just after 7 p.m. ET. They then close things out with a possible first round playoff preview against the Detroit Pistons in a game that will tip off just after 8 p.m. ET.