LeBron Explains Why He Was Yelling at Kyrie Irving During Timeout 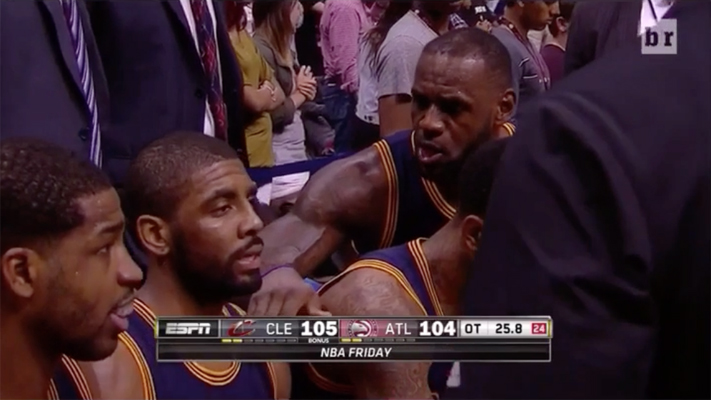 As the Cleveland Cavaliers barely squeezed by the Atlanta Hawks last night with a 110-108 victory in overtime, another storyline was atop the Cavalier headlines.

With 25.8 seconds to go, and the Cavs up one in overtime, LeBron James was seen yelling, in a very animated manner, at point guard Kyrie Irving during a timeout.

This of course came a few minutes after Irving let opposing point guard Jeff Teague drive right by him en route to an easy layup.

Even the most talented of lip readers apparently couldn’t interpret what James said to Irving in the huddle as many thought the four-time MVP was actually scolding Irving.

However, the real reason behind James’ banter has surfaced as Justin Rowan of Fear the Sword had unveiled.

So that’s what LeBron was yelling at Kyrie pic.twitter.com/32cIG48MQu

Evidently, James was actually pushing and motivating his teammate to knock down pressure-situation free throws because of how the 24-year-old point guard had struggled the entire game.

“I told him it doesn’t matter what happened in the last 52 1/2 minutes, just go up there and knock them down because you can do that,” said James. “I know what’s going on in your mind. You’re able to calm yourself and he was able to do that. I hate the fact that he broke his streak, but he went up there and knocked the free throws down and we needed every last one of them.”

James also took note of Irving’s struggles and how the young point guard needed someone to pick him up:

“As great as Kyrie is, he struggles. We all struggle. Sometimes you need someone to pick you up.”