LeBron James, Kobe Bryant, and the Rivalry That Never Happened 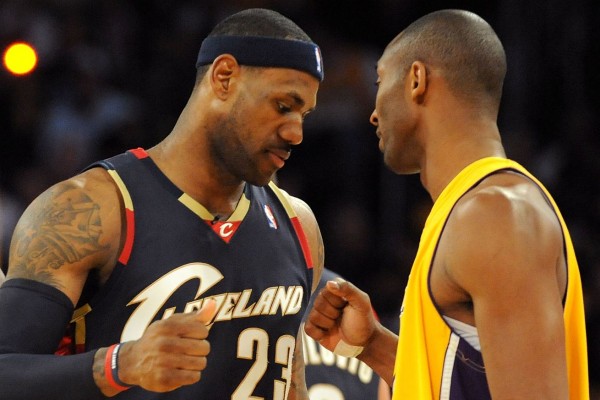 When the Cleveland Cavaliers visit the Los Angeles Lakers on Thursday night, it will mark the final meeting between LeBron James and the soon-to-be-retired Kobe Bryant.

They’ve met with the NBA spotlight squarely on them, including on Christmas Day several times. They’ve met in numerous All-Star Games.

But the two players, who have transcended their sport more than anyone in the 21st century, never have, and never will, square off with a championship at stake. While James is setting his sights on a sixth consecutive trip to the NBA Finals when the playoffs begin next month, Bryant’s farewell tour has largely been an unsightly mess.

The seven-year difference in age between them has a large part to do with their never having crossed paths in June. James was still an underclassman at Akron’s St. Vincent-St. Mary High School when Bryant and Shaquille O’Neal were wrapping up their run of three titles in a row. When he joined the Cavs in 2003, they were coming off an abysmal 17-65 season and were in no position to contend for a playoff berth.

As Bryant said last month in his final trip to Cleveland:

“I wouldn’t say he was a rival. … I just felt like we were completely different generations. I just missed that thing completely. Not like a Magic and Bird sort of thing. It was more like, from the time he came in the league it was more helping him, giving him direction, advice, ’cause I was just so much older by NBA years. So no, I’ve never had that.”

That being said, there was a time when all indications pointed toward a showdown that would have been a ratings bonanza for ABC as well as a possible end to Cleveland’s oft-documented professional sports championship drought.

The Cavs finished the 2008-09 season with an NBA-best 66 victories. The Lakers ended up just one win behind them and defeated the Cavs in their two head-to-head meetings, with James going a collective 14-of-45 from the floor overall and 3-of-13 from three-point range.

In hindsight, it’s easy to say the Cavs weren’t that vastly improved from the team which was swept in the Finals two years earlier by the San Antonio Spurs. The main members of James’ supporting cast included Mo Williams, the mercurial Delonte West and a sizable collection of over-30 players (Zydrunas Ilgauskas, Joe Smith, Wally Szczerbiak, Ben Wallace).

But with James capturing his first MVP award and then leading the Cavs to sweeps of the Detroit Pistons and Atlanta Hawks, a best-of-seven series with the Lakers seemed inevitable.

Then along came the Orlando Magic in the Eastern Conference Finals.

The Cavs dropped Game 1 at Quicken Loans Arena, where they had gone 40-1 during the regular season, and needed a last-second three-pointer from James to avoid heading to Orlando with an 0-2 series deficit. Any carryover from that dramatic victory disappeared in a 99-89 Game 3 loss, which was followed two nights later by a Magic win in overtime.

One night after the Lakers clinched the Western Conference crown with a Game 6 rout of the Denver Nuggets, it was the Magic who earned the right to face them as they never trailed in eliminating the Cavs. Dwight Howard, whose one season with Bryant and the Lakers three years later proved to be an unmitigated disaster for both parties, scored 40 points and grabbed 14 rebounds while James finally felt the effects of having to carry his team.

Bryant has spent this season struggling with a bothersome right shoulder and a group of players learning how to play as a unit under one-time Cavs coach Byron Scott. He trails only Kareem Abdul-Jabbar and Karl Malone on the NBA’s all-time scoring list, but James has already registered more career assists and blocks than Bryant and should pass him in rebounds in the weeks ahead.

In the past 16 years, either James or Bryant has appeared in the NBA Finals 13 times. Bryant has a 5-2 record against six different teams, none of which have been the Cavs or Miami Heat. The Lakers never got so far as the conference finals during the four years when the Heat ruled the East.

The cameras will be rolling Thursday night. Jack Nicholson and an assortment of other Hollywood stars will be seated courtside.

But to two players with five scoring titles and seven championship rings between them, the game will be a little more than a reminder of a rivalry that never was.