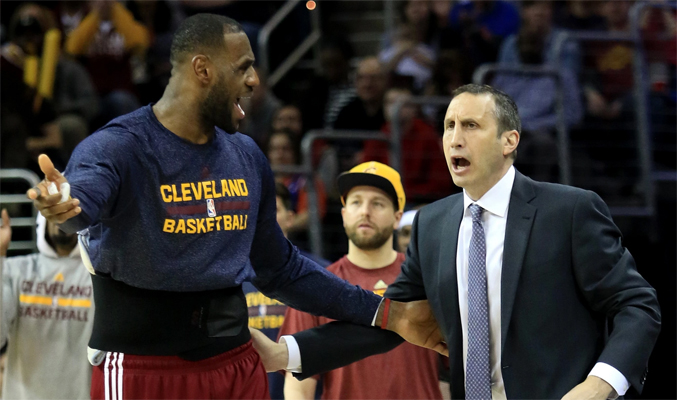 The controversial firing of David Blatt as head coach of the Cleveland Cavaliers sparked a number of comments related to what was perceived as the unfairness of getting rid of a coach, who had led a team to the NBA Finals last season and had a 31-10 record this season.

While many of those comments came from either other NBA coaches or out-of-town media, the most volatile backlash has emerged from Israel. This is according to the Cleveland Plain Dealer’s Joe Vardon, who wrote that one journalist in the country compared LeBron James’ image in the country to the terrorist group Hamas for his alleged role in the dismissal.

Blatt, whose family lives in Israel and has dual citizenship there and in the United States, is extremely popular in the country. That rampant popularity was one reason why the reaction was so visceral, according to Sharon Davidovitch, a sportswriter for Ynet and Yedioth Ahronoth, an Israeli news site.

Speaking to Agence France-Presse, Davidovitch commented about the newfound animosity toward James:

“LeBron James is now the most hated person in Israel,” said Davidovitch. “It’s a little bit joking and a little bit true: These days I can only compare the Israeli hate for LeBron James to the hate for Hamas.”

That follows stories in Sunday’s Israeli newspapers that gave the news front page coverage, as well as profane and racist comments in both English and Hebrew that were posted on James’ Instagram account.

According to a tweet from American basketball player Stu Douglass, who is playing in the country for an Israeli team, Cavaliers games are no longer shown as a result of Blatt being fired:

Israeli TV won't put the Cavs games on now since Blatt got fired and now everyone hates Lebron. Really messing with my Bron viewing.

The belief by those making such claims, in and out of Israel, is that James was directly responsible for Blatt being dismissed. That thought process was dismissed by Cavs general manager David Griffin when he announced the firing last Friday, and James said that the first he had heard of the dismissal was when Griffin told the team earlier that day.

Blatt had been under fire during most of last season, but had managed to compile a record of 83-40 during his less than two seasons as Cleveland’s head coach. Along the way, James’ attitude toward him was debated endlessly by media outlets, with the apparent refusal by Blatt to criticize James seen as a way for him to build a relationship.

The Blatt firing was enough of a topic of conversation in Israel that the United States Ambassador to the country, Dan Shapiro, offered a comment on Facebook:

“I don’t really understand the Cavs’ decision to fire David Blatt after all his success.”

Blatt, who was making $5 million per year, is still owed money for not only this year, but the remaining two years of his contract.