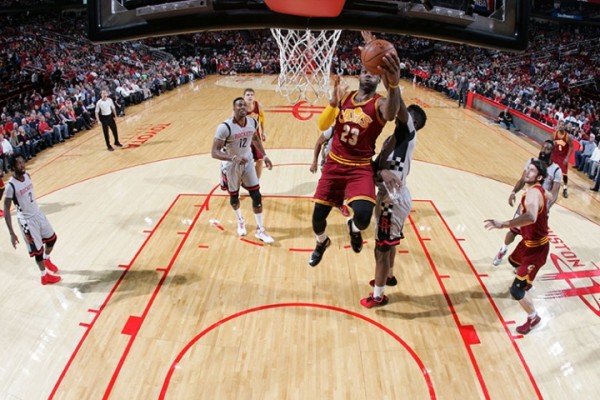 (Houston, TX) – Using stifling defense to shut down their opponent, the Cleveland Cavaliers closed out their six-game road trip by knocking off the Houston Rockets, 91-77, at Toyota Center on Friday night.

Holding the Rockets to just 51 points through three quarters, the Cavs essentially put the game away during the third, holding Houston to just 24 percent field goal shooting over those 12 minutes. During the entire contest, they made a point to especially clamp down on James Harden, who made just two of his 10 field goal attempts and was held to 11 points, 17 below his season average.

With the game in the Cavaliers’ grasp during the fourth quarter, their defensive hold on the Rockets eased up, but Houston was still held to 35 percent field goal shooting for the game.

LeBron James spoke about the desire to shut down Harden, describing him in colorful terms:

“Did a great job of cutting the head off the snake,” said James. “I give a lot of credit to J.R. and Shump.”

Iman Shumpert explained how the team was able to manage that difficult task:

“I thought we did a great job of communicating, we always knew where he was.”

“We did some different things, like closing spaces that he can get into that kept him from getting shots off.”

Kyrie Irving paced the Cavaliers with 23 points and four rebounds, while James had another strong all-around game with 19 points, seven rebounds and seven assists. Irving showed no ill-effects from playing in his first back-to-back game since last season.

Irving also spoke about how the main goal on the evening was to shut down Harden:

“We stuck to the gameplan and we trusted our weakside rotation,” said Irving. “We wanted to have the other guys beat us.”

Three other players: J.R. Smith, Kevin Love and Tristan Thompson also scored in double figures, with Love adding another double-double to his ledger with 11 points and 13 rebounds.

Despite the team shooting just 39 percent on the night, Blatt was not upset:

“We had more good shots than we’ve had in a long time.”

In the opening portion of the game, the Cavaliers against got off to a slow start, trailing 13-4 with less than three minutes gone. However, they tightened up their defense and limited Houston to just 21 percent field goal shooting for the rest of the half. They took their first lead in the closing seconds of the first quarter on a layup by Matthew Dellavedova, holding a 23-21 lead after one period.

One of the subtle keys to that comeback was the boost provided by veteran Anderson Varejao who hadn’t played in a game in three weeks. Despite playing just seven minutes, Love pointed out Varejao’s value:

“Andy was great. He got us going and gave us a spark off the bench,” said Love. “He did everything he could to help us.”

James praised the overall play of the bench:

“They were huge, because we exerted a lot of energy last night, and we knew we were going to need their help tonight,” said James. “It was good the way they responded and did a great job of uplifting us.”

Blatt was enthusiastic about how the trip went and the potential it displayed:

“It was an outstanding road trip for us, great job from the guys,” said Blatt. “It’s a good sign when you can finish a long road trip with a game like that.”

The win improves Cleveland’s record to 28-10 on the year, while Houston drops to 21-20 on the season. During the six-game road trip, the lone game the Cavs lost was in San Antonio.

The Cavaliers now return home for a huge Monday night game against the Golden State Warriors, looking for revenge after dropping a close contest on Christmas Day. Tipoff will be just after 8 p.m., with the game again broadcast nationally, this time by TNT.