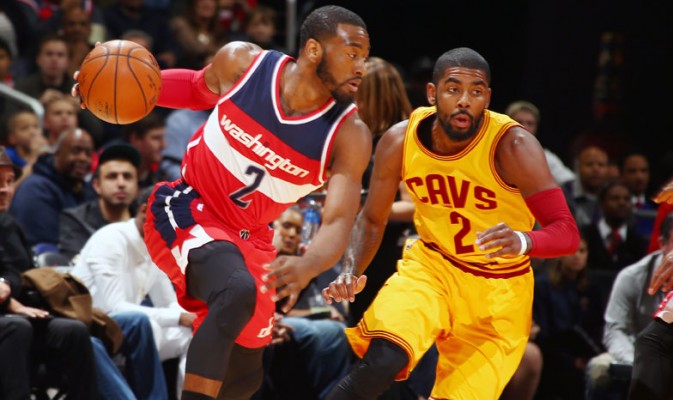 Voting for the NBA All-Star Game has always been based on familiarity and popularity, with some controversy inevitably coming into the process. The latter is definitely true after Washington Wizards’ guard John Wall indicated that the tabulation was a “joke” because he trailed the Cleveland Cavaliers’ Kyrie Irving in the game’s most recent voting returns.

Wall made the comments to CSN Mid-Atlantic and used some blunt language to express his displeasure:

“It’s a joke,” said Wall. “I played like horseshit the first month and a half but I still was averaging like 16 and eight. That’s not bad numbers.”

Not angry at Irving, Wall instead took the time to acknowledge his talent:

“I guess it’s the record. No offense Kyrie, he’s played (three) games,” said Wall. “If he was healthy he probably would be in that position because he’d be playing well. I can see him there because that’s how talented he is.”

The main thrust of Wall’s anger is that Irving has only played in three games thus far this season due to the latter’s recovery from a fractured kneecap suffered in last June’s NBA Finals. In those three games, Irving has shot just 10-of-34 from the field for 29 percent.

In contrast, Wall is averaging 19.5 points and 9.7 assists in 28 games. Those numbers are even higher for the month of December, with Wall scoring 22.8 points and handing out 11.8 assists in 14 contests.

Wall is actually fifth in voting for Eastern Conference guards, trailing Miami’s Dwyane Wade, Irving, Toronto’s Kyle Lowry and Chicago’s Jimmy Butler. Even if Wall doesn’t bypass Irving in subsequent voting, he’s likely to be selected by the coaches for the annual matchup that takes place in Toronto on February 14, 2016.